Leaders in the organized bar don’t usually take up issues that are highly controversial within the profession itself—they’ll likely face plenty of controversy in the normal course of their terms. Why look for a fight (especially of the intraprofessional variety) in a prestigious and temporary role?

Because, says William C. Hubbard, “if we don’t do something on this justice gap, we’re putting at risk our ability to be a self-regulating profession.”

Hubbard, during his ABA presidency in 2014-15, chose to take on what probably is the most controversial issue facing the legal profession: how to leverage technology and nonlawyer help to make the justice system accessible to the 80 percent of the population that can’t afford it.

Pushback was guaranteed when Hubbard, 64, created the Commission on the Future of Legal Services as he began his term, tasking it with a grassroots approach seeking workable solutions and geared to the viewpoint of legal services consumers—or, more precisely, those who can’t afford the services. He mustered the ABA’s variety of resources and brought in stakeholders, such as the Conference of Chief Justices, the National Center for State Courts and the Federal Judicial Center, to help the association get out in the lead for guiding developments. 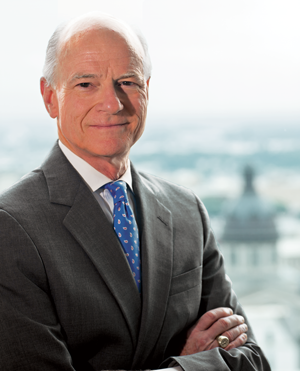 The commission’s proposal for ABA policy in Resolution 105, titled “Model Regulatory Objectives for the Provision of Legal Service,” passed in the association’s House of Delegates at the midyear meeting in February.

Increased development of various nontraditional legal services proved to be one of the most contentious matters before the House in years. The large and influential Litigation Section came out against the proposal, and the equally powerful Business Law Section came out for it. And two former ABA presidents took the dais to weigh in—Wm. T. “Bill” Robinson III against it and Tommy Wells for it.

Opponents did secure an amendment: The resolution says it does not change ABA policy against law-firm ownership by nonlawyers or the prohibition on lawyers sharing fees with nonlawyers.

“But I haven’t heard those who push back against it suggest better alternatives,” says Hubbard. “I’ve simply heard suggestions that we can just do more pro bono. But we’ve tried that, and it hasn’t closed the gap. Others, in all candor, take a fairly protectionist approach to this, but I think our highest calling is to deliver justice and make it accessible to the public.”

At the most recent ABA Annual Meeting, the commission released its detailed Report on the Future of Legal Services in the United States, which provides state court systems and others with a catalog of innovative, nontraditional legal services in the marketplace and recommendations for new possibilities, some of which might require new rules and even legislation.

While some critics have gone so far as to say Hubbard’s effort will end the legal profession as we know it, supporters say he was right to climb aboard the engine of a moving train.

“In pursuing the interests of consumers as users of the legal system, he is bold and unafraid to court controversy and gone where others fear to go,” says commission member James Sandman, president of the Legal Services Corp. “That’s quite unusual, particularly for someone leading a bar association.”

Richard Granat, a lawyer-entrepreneur and early adopter in offering online legal help, believes that while the commission’s work is a pathbreaking effort by the organized bar, growing technological capabilities and consumer needs likely will continue to push the envelope.

“If the self-regulatory framework doesn’t serve 80 percent of the U.S. population, then something is radically wrong with the structure of the profession and how it’s organized,” Granat says. “Innovation is happening outside law firms themselves.”

Granat is one of the first Legal Rebels, and he believes Hubbard’s effort is somewhat a game changer.

“He opened the door and created a discussion,” says Granat. “That door can’t now be closed.”

Click here to read about the rest of the ABA Journal’s 2016 Legal Rebels.