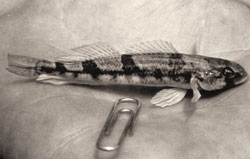 The 3-inch snail darter starts it all. Photo by Knoxville News-Sentinel.

In October 1975, the secretary of the interior listed a tiny 3-inch fish—the snail darter—for protection under the Endangered Species Act of 1973. The minnow did what legions of activists could not: halted construction on the nearly completed Tellico Dam in Tennessee.

The smallest fry became the biggest fish in headlines. In 1978, the U.S. Supreme Court upheld the statute’s protection of the snail darter in Tennessee Valley Authority v. Hill.

Growing out of a 1960s social movement fearful of rivers on fire and pervasive chemicals, environmental law had become an institution.

Never mind that snail darters were relocated in 1979 when Congress exempted the dam from the ESA. Courts were receptive to environmental concerns. In another example in 1976, the U.S. Court of Appeals for the District of Columbia Circuit upheld the Environmental Protection Agency’s regulation of lead gasoline under the Clean Air Act, enacted in 1963 but greatly expanded in 1970, ‘77 and ‘90.

Environmental law was moving right along.

The Tellico Dam construction is halted. Photo by Knoxville News-Sentinel.

President Richard M. Nixon had quickened developments by creating the EPA through executive order in 1970, followed by the sweeping Clean Water Act of 1972, which aimed at ridding the nation’s waters of pollutants. In 1976, more specific laws targeted solid and hazardous waste, and the manufacture and sale of chemicals.

The news media now eagerly pursued environmental stories. In 1978, reporters exposed dangerous levels of toxins in the groundwater of Love Canal, a neighborhood in Niagara Falls, New York. There were high rates of birth defects and serious illness; Hooker Chemical Co. had buried 21,000 tons of toxic waste in the area before selling the property to the city for $1 in 1953, noting the problem on the deed.

The disaster sparked outrage and led to lame-duck President Jimmy Carter signing the Superfund law in 1980 (the Comprehensive Environmental Response, Compensation and Liability Act) for cleanup and shifting costs to those responsible. It was retrospective: In 1995, Occidental Petroleum—which purchased Hooker Chemical 15 years after it had sold the land—would settle a lawsuit by paying the EPA $129 million in restitution. 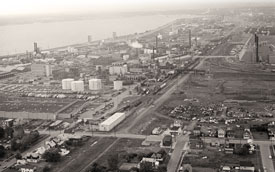 Toxins seep into the water of the Love Canal community in Niagara Falls, shown here in 1978. AP Photo

In less than a decade, a revolution in environmental law had taken place.

“The Nixon, Ford and Carter presidencies were the golden age of environmental lawmaking,” says Michael Gerrard, an environmental law professor at Columbia Law School and former chair of the ABA’s Environment, Energy and Resources Section. It was also overwhelmingly bipartisan.

But in 1981, President Ronald Reagan’s administration came in with what it saw as a mandate to shrink government and get regulators out of the free market. Reagan appointed heads of the EPA and the Interior Department with a new mandate: Cut costs. Anne Gorsuch oversaw slashing of the EPA’s budget and staff; James Watt cut Interior’s environmental programs and put vastly more land on lease for coal mining.

Both were hounded from office. Environmentalism had gained such widespread support that Reagan’s Republican successor, George H.W. Bush, followed through on a promise in his 1988 presidential campaign, supporting the Clean Air Act Amendments of 1990 that strengthened the statute.

But no other significant environmental laws have passed in the ensuing quarter century.

President Bill Clinton attempted a BTU tax, similar to a levy on carbon, and pushback helped give Republicans both houses of Congress in 1994. As the seeds of hyperpartisanship were planted while Georgia Republican Newt Gingrich was speaker of the House of Representatives, both environmental science and policy came under increasing attack from business interests and many conservative politicians.

Now, the American Legislative Exchange Council, which brings conservative state legislators together with corporate representatives to develop model legislation, is questioning whether humans are responsible for climate change and opposing renewable energy efforts.

Yet fearful of public scorn and investor flight, a number of big companies, such as Google and Yahoo, recently left the organization over ALEC’s climate positions. So did Occidental Petroleum, which had paid for the Love Canal mess.