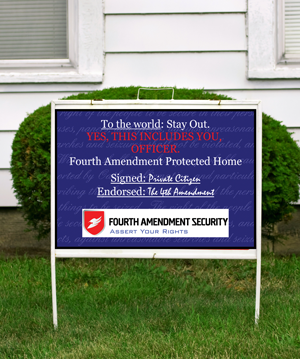 Two law professors found that 2013 decision an odd application of the Fourth Amendment. “So, being law nerds, we thought we’d give people an opportunity to change any implicit license with explicit signs,” says Andrew Guthrie Ferguson who teaches at the University of the District of Columbia’s David A. Clarke School of Law. Together with Stephen Henderson of the University of Oklahoma ‘s College of Law, Ferguson created actual yard signs for that very purpose.

So if you want to forbid not only drug-sniffing dogs but also Thin Mints hawkers from approaching your front door, shop around at fourthamendmentsecurity.com for what Ferguson and Henderson are calling LAWn Signs.

The signs are “one-part joke, one-part serious,” Ferguson explains. While the professors don’t expect to get rich from sales, they do hope the signs serve as a tool to teach ordinary citizens about the Constitution.

“Right now, the Fourth Amendment is protecting your house, but it’s hard to conceptualize constitutional rights,” Ferguson says. “We’re seeking to make the Constitution real to people. It’s a document that unites us all. Civic education can actually be accomplished through absurdity.”

Ferguson believes there could be a real market for the signs among civil libertarians (personal freedom), tea party activists (down with big government) and fraternities and sororities (no searches, please).

In addition to the signs, bumper stickers are available. T-shirts and magnets are on the way.