7 Marathons, 7 Continents, 7 Days: Lawyer goes to extreme lengths for a good cause 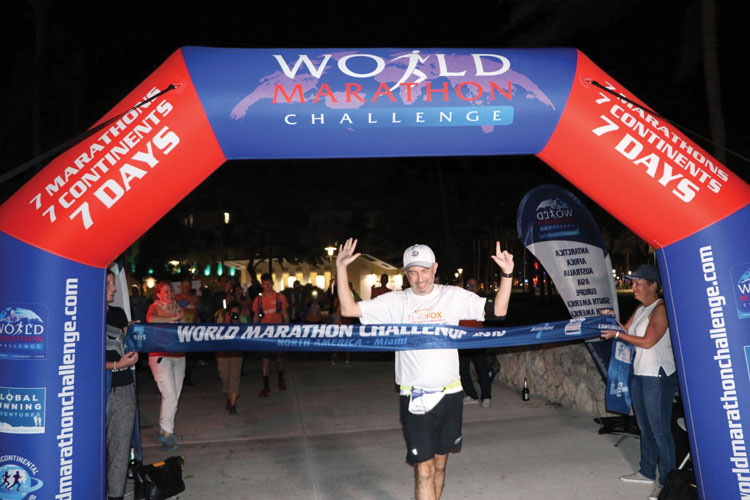 When attorney Bret I. Parker, executive director of the New York City Bar Association, was diagnosed with Parkinson’s disease 11 years ago, he committed himself to spreading awareness about the disease and raising funds to finance research for a cure. But he doesn’t take a traditional approach: Parker pushes himself to the limits of his physical endurance running marathons to achieve his fundraising goals.

“So far, in the past five years, I’ve been able to raise approximately $450,000,” says Parker, a veteran marathoner.

This February, Parker took his marathon fundraising efforts to the ultimate extreme. For the first time, he ran the World Marathon Challenge: seven marathons on seven continents in seven consecutive days.

The event attracts participants from around the world, including others with medical challenges, according to Richard Donovan, a World Marathon Challenge spokesperson. Parker was the only runner with Parkinson’s.

In frigid Antarctica, Parker ran the marathon in laps around a landing strip of packed ice and snow at Novo, a Russian research station. He ran the seventh and final marathon in Miami.

Unlike the first marathoner, the legendary Pheidippides, who in 490 B.C. ran a single 26-mile journey from the city of Marathon to Athens with news of a Greek victory and collapsed, Parker stayed on his feet.

“No collapsing,” says Parker, “but I was very stiff and tired.” He says he was also “exhausted, relieved and ecstatic.”

But Parker says that running doesn’t exactly describe his mode of locomotion in the seven marathons. Yes, he ran, says Parker, “if by running you mean running, walking, limping and hobbling.”

Parker’s seven-continent journey raised more than $250,000 for the Michael J. Fox Foundation. Through other runs, triathlons, a skydive and a mountain climb, Parker has earned more than $500,000 total to support the foundation’s Parkinson’s research.

Parker says he probably won’t tackle another World Marathon Challenge, but the result was worth it. “I’m so grateful and a bit overwhelmed by all of the support, donations and interest in what I’m doing to try to raise awareness of and find a cure for Parkinson’s.”

This article was published in the April 2018 issue of the ABA Journal with the title "7 Marathons, 7 Continents, 7 Days: Lawyer goes to extreme lengths for a good cause."