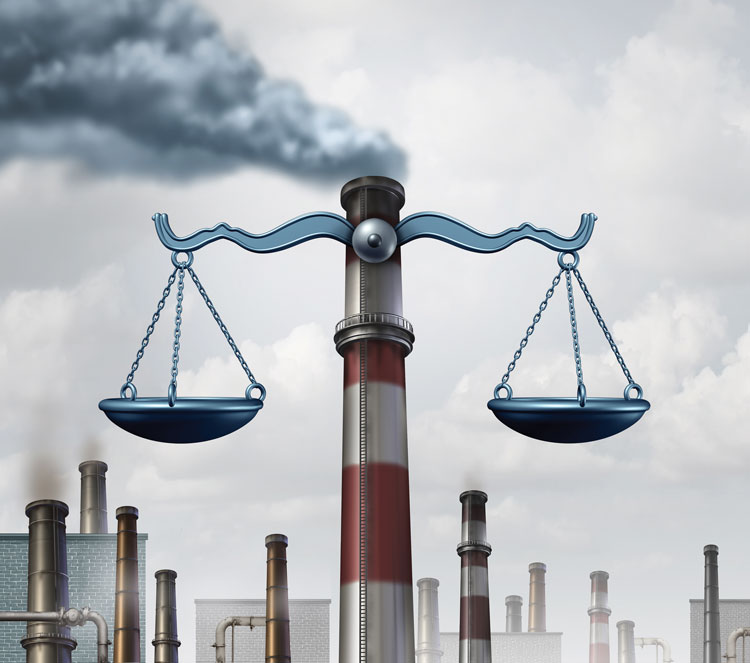 As Howard Kenison prepared to chair the ABA Section of Environment, Energy and Resources in August 2020, he put environmental justice at the top of his list of initiatives.

In particular, Kenison planned to create a task force to review and possibly revise a 1993 resolution related to environmental justice.

The measure, submitted by the Standing Committee on Environmental Law (which later merged with SEER), pledged support for laws, regulations and policies that ensure “a disproportionate share of the burden of environmental harm does not fall on minority and/or low-income individuals, communities or populations.”

Kenison, a shareholder at Jones & Keller in Denver, recognized much had changed since the ABA turned its sights on environmental justice more than 25 years ago. According to the U.S. Environmental Protection Agency, environmental justice is defined as “the fair treatment and meaningful involvement of all people regardless of race, color, national origin or income, with respect to the development, implementation and enforcement of environmental laws, regulations and policies.”

A 1982 protest in Warren County, North Carolina, strengthened the national movement seeking social justice and environmental protection. During the protest, members of the predominantly African American community, civil rights leaders and other activists tried to stop a toxic waste landfill from being placed in the county, resulting in the arrests of more than 500 people.

The protest led to several studies over the next several years examining the relationship between race and hazardous waste siting decisions. By the early 1990s, the EPA created the National Environmental Justice Advisory Council, and President Bill Clinton issued an executive order directing federal agencies to make environmental justice part of their missions.

James May received a call in November 2020 from Kenison, who asked him to lead SEER’s Environmental Justice Task Force.

May, a professor and founder of the Global Environmental Rights Institute at Widener University Delaware Law School, agreed and helped recruit other members to discuss ways the section could further environmental justice. Their conversations, which later included the Section of Civil Rights and Social Justice and the Center for Human Rights, culminated in a new resolution that the House of Delegates adopted in August 2021.

The resolution calls on the association to advance environmental justice principles and considerations in its programs, policies and activities; and to work with governmental bodies to establish laws, regulations and other measures “that reflect the right of every human being to dignity and a clean and healthy environment.”

At the same time, SEER sought to set up an ABA-wide task force on environmental justice to assist with implementation of the new policy.

“The House of Delegates has a fair number of resolutions, but they don’t have ways to implement them, and that was important to us,” May says. “We proposed to the Board of Governors after going through the president’s office with President [Reginald] Turner on board to assemble a cabinet-level group.”

Turner appointed 13 task force members, including May, who serves as a special advisor. It also has representatives from SEER, CRSJ, the Center for Human Rights, the Business Law Section, and both lawyer and nonlawyer experts in environmental justice.

Michelle Diffenderfer, the current chair of SEER, credits her colleagues for their diligent work on the resolution, which she says provides an important historical perspective on environmental justice. She also commends the ABA for meeting the moment. “You learn so much about the history of environmental justice in this country and the different ways governments and entities have tried and failed to use environmental justice in the courts, and then more recently the use of civil rights laws that have gained some success,” says Diffenderfer, president and shareholder of Lewis, Longman & Walker in West Palm Beach, Florida.

Fleming, a partner in DLA Piper’s Washington, D.C., office, was chief of staff to the EPA during the Obama administration and the regional administrator to EPA Region 4, where she worked on environmental justice with eight Southeastern states and six federally recognized tribes.

Pair became a senior trial attorney in the U.S. Department of Justice’s environmental enforcement section in 1980. He was the environmental justice coordinator and represented the department as a senior career representative on the Federal Interagency Working Group on Environmental Justice until his retirement in 2015.

Fleming currently serves as an environmental justice advisor for SEER’s council; Pair helped lead its first Special Committee of Environmental Justice from 2003 to 2008.

“I don’t mean to demean my own work or that of the first committee, but the new resolution holds the bar professionally responsible and says, ‘We as lawyers, the American Bar Association, need to promote environmental justice and be active in it,’” says Pair, who is also an adjunct instructor at Howard University School of Law. “It affects the basic reason for the bar association, which is to set standards of legal access for all people and promote the American principle of equality for all.”

The task force, which began meeting this spring, is preparing a report that examines the ABA’s work around environmental justice and identifies any gaps. The report could also suggest new policies, outline legal education needs and share best practices with members, law schools and legal organizations.

“The late congressman John Lewis said that environmental justice is the civil rights issue of our time,” Fleming says. “Lawyers have always been at the forefront of fights for civil rights, and so who better to be in a position to analyze laws and identify opportunities to change laws to benefit communities and get rid of the vestiges of environmental racism that have led to these communities bearing an undue burden of pollution?”

Fleming says it was also important to engage community leaders in the work of the task force. One of these members is LaTricea Adams, the founder, president and CEO of Black Millennials 4 Flint, a civil rights and environmental justice organization that aims to eradicate lead exposure.

“I’m able to bring a bit more nuance of what is actually happening on the ground,” says Adams, who is based in Memphis, Tennessee, and also serves on the White House Environmental Justice Advisory Council. “To be honest, it’s the easier part to get policies passed, to get things in writing. But what I bring in is the real deal, like, ‘This is what happens if a policy isn’t being implemented or if a policy isn’t working.’”

The task force plans to release its report by the end of the year, but its work will continue through August 2023.