When the ABA Commission on Ethics 20/20 gathered in Washington, D.C., for its most recent meeting, it was already looking at a full menu of challenging issues relating to the impact of technology and globalization on professional conduct rules for lawyers. But by the end of the meeting, the commission was holding the recipe for yet another matter filled with complexity and potential controversy.

In essence, the commission was asked to consider a proposal to create a separate regulatory regime that would address concerns large law firms have about such issues as conflicts of interest, liability and lawyer mobility.

The proposal was submitted by the Law Firm General Counsel Roundtable, whose membership comes from the ranks of large firms that primarily represent multinational corporate clients. The roundtable’s written proposal (PDF) to the commission was signed by general counsel or risk management counsel from 23 firms around the United States, including such legal giants as Nixon Peabody, O’Melveny & Myers, Baker & McKenzie, Latham & Watkins, and Bryan Cave.

But while the proposal was submitted by the lawyer group, the real beneficiaries would be the clients they serve, said Anthony E. Davis, a partner at Hinshaw & Culbertson in New York City. Davis presented the proposal to the commission with James W. Jones, a senior vice president in the Washington, D.C., office of Hildebrandt Baker Robbins, a legal consulting firm that helped created the Law Firm General Counsel Roundtable in 2003.

“There is a sleeping giant: large multinational companies,” Davis told the commission. “They and their lawyers are starting to say the current regulatory structure just doesn’t work for them.”

The primary causes of concern among large law firms and their corporate clients, Davis and Jones said, are the lack of uniform rules of professional conduct in the United States, where lawyers are regulated on a state-by-state basis; restrictions on lawyer mobility imposed by many state rules; and the basic purpose of lawyer regulation in the U.S.

“The rules imposed by the separate states are primarily designed to protect individual consumers of legal services who may lack the experience or sophistication to protect themselves against unethical or otherwise improper conduct by the lawyers who represent them,” states the roundtable’s letter to the commission. “While such rules may be perfectly sensible when dealing with such unsophisticated clients, the strictures and presumptions they impose do not work well when applied to relationships between large commercial enterprises and their outside counsel.” 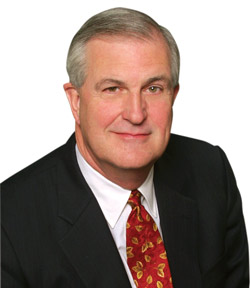 But the proposal is also rooted in a desire to make large U.S. law firms more competitive in the global environment. “Ultimately, we’re talking about an economic issue,” said Jones, who noted that some other countries offer law firms a more flexible regulatory environment than the United States. “The amount of business brought to the United Kingdom by law firms is not insignificant,” he said.

The roundtable is proposing that a definition of “sophisticated” clients be developed based on such criteria as whether a firm is publicly traded, the size of its balance sheet, the number of jurisdictions in which it operates, and how much it uses legal services.

The proposal also calls for more flexible rules on dealing with potential conflicts of interest, limitations on liability, and greater mobility across jurisdictions for lawyers at firms that represent large clients.

Jones and Davis said they brought the proposal to the Ethics 20/20 Commission in hopes that it will be more responsive than other bar groups. Right now, said Davis, “there’s no other place where we can have this type of conversation.”

But now a key question for the commission is what to do with the proposal from the general counsel roundtable.

At the meeting in Washington, commission members’ reactions were mixed and cautious. While acknowledging the concerns of large law firms, some commission members wondered whether a separate regulatory structure for them would be necessary or politically practical, and others suggested that at least some concerns of the large firms might be addressed by looking at specific issues rather than building an entirely new regulatory structure.

Concerns also were expressed about the tone of the proposal. In its current form, the proposal “would be dead on arrival in the House of Delegates,” said commission member Frederic S. Ury, who noted that the ABA’s policymaking body is made up largely of lawyers from smaller firms. It would likely be viewed as an effort to carve out special treatment for larger firms “and another system for the rest of us peons,” said Ury, a founding member of Ury & Moskow in Fairfield, Conn.

In an email response to questions from the ABA Journal, the commission’s co-chairs—Jamie S. Gorelick, a partner at Wilmer Cutler Pickering Hale and Dorr in Washington, D.C., and Michael Traynor of Berkeley, Calif., a past president of the American Law Institute—said the roundtable’s proposals relating to conflicts of interest would be referred to the commission’s working group on those issues. The working group will decide whether to bring the matter back to the full commission for further consideration.

Gorelick and Traynor noted that issues relating to lawyer mobility are priorities for the commission. “The issues are not limited to physical mobility,” they said. “Technology allows lawyers to project themselves anywhere. As the commission has stressed all along, mobility issues affect all lawyers, not just those in large law firms.”

So far, the commission has worked carefully within the existing principles and framework of the regulatory structure for lawyers practicing in the United States.

At its meeting in Washington, the commission reached consensus on the first pieces of the package of recommendations it will submit next year to the ABA’s House of Delegates. Those actions signaled that its proposals for the most part are likely to be largely evolutionary rather than revolutionary.

“We’re trying to take bedrock principles in the rules and help the profession understand how they apply in a technological and global environment,” Gorelick said. “Some people think we have a hidden agenda, which we don’t really have.”

The commission endorsed draft versions of five recommendations expected to be considered by the House in August 2012 at the ABA Annual Meeting in Chicago. The recommendations and supporting reports have not been put into final form, however, and they have not yet been posted on the commission’s page on the ABA website.

The recommendations cover the following issues:

Outsourcing. Without taking a position on the practice, the commission proposes revisions to comments to existing rules in the ABA Model Rules of Professional Conduct (which are widely followed by the states) identifying factors lawyers need to consider when retaining outside lawyers to work on client matters, and affirming that a client’s informed consent should be obtained before outside lawyers are retained.

Confidentiality. The commission proposes revisions to the Model Rules recognizing that materials subject to confidentiality rules include electronically stored information, including metadata, and directing lawyers to make reasonable efforts to prevent inadvertent disclosure of in formation relating to representation of a client.

Inbound foreign lawyers. One recommendation would apply the ABA Model Rule for Registration of In-House Counsel to lawyers from foreign jurisdictions. A related recommendation would also apply the ABA Model Rule on Pro Hac Vice Ad mission to foreign lawyers. Finally, the commission will propose revisions to the Model Rules to allow temporary practice in U.S. jurisdictions, but with tougher restrictions than apply to American lawyers.

The commission still has some tough issues to deal with in the coming months, including alternative business structures, client development and alternative litigation financing. But it plans to consider even those issues within the context of existing ethics principles, Gorelick said.

“It’s not just about rule changes,” she said, “but also informing the profession about the impact of certain changes in technology, globalization and the way we communicate.”