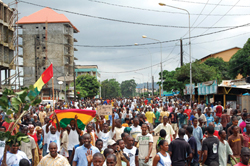 The numbers speak with a terrible eloquence: One in three women worldwide will experience physical or sexual violence in her lifetime, and in some countries that figure tops 70 percent.

These alarming statistics from the United Nations help explain why the ABA supports enactment of the International Violence Against Women Act. The measure would commit U.S. leadership and resources to addressing a global pandemic that cuts across ethnicity, race, class, religion, education levels and international borders.

The chairman of the U.S. Senate Committee on Foreign Relations, Sen. John F. Kerry, D-Mass., and the committee’s ranking Republican member, Sen. Richard G. Lugar of Indiana, say they will introduce the bill in the near future. The committee convened a hearing about global violence against women on Oct. 1, just days after women were sexually assaulted by police, soldiers and civilians when government forces broke up a protest march in Guinea on Africa’s west coast. Kerry said the hearing was the committee’s first ever to address violence against women on a global scale. A House Foreign Affairs subcommittee also held a hearing about the issue on Oct. 21.

The ABA’s position was set forth in a letter (PDF) that Thomas M. Susman, director of the ABA Governmental Affairs Office, submitted to Kerry and Lugar on Oct. 5.

“Despite international efforts to address gender-based violence, victims still face many obstacles to achieving justice,” Susman wrote. “Such obstacles usually involve the absence of legal protections, the degree to which victims know of their rights and have access to legal services, and the prevalence of untrained or biased legal institutions.”

The ABA, working primarily through the Commission on Domestic Violence and the Rule of Law Initiative, already is in the forefront of efforts to bolster legal protection and assistance to victims of gender-based violence in the United States and abroad.

ON THE FRONT LINES

In January 2008, the rule of law initiative opened an office in Goma, a city along the eastern border of the Demo­cratic Republic of the Congo. An ongoing conflict between government troops and rebel militias in the central African country has produced the most severe rape crisis in the world today.

The ABA office provides legal consultations to women and girls who have been raped, assists the provincial bar association in providing pro bono assistance to rape survivors, and trains police, lawyers, prosecutors, magistrates and judges to investigate, prosecute and adjudicate these cases. The association also operates a legal clinic that helps rape victims file charges against their assailants.

The program is funded by the U.S. State Department’s Bureau of Democ­racy, Human Rights and Labor. Recent grants from the Dutch government and the MacArthur Foundation will allow the ABA program to expand its efforts into two additional provinces.

In testimony earlier this year before a panel of the Senate Appro­pri­ations Committee, former ABA Presi­dent Michael S. Greco of Boston cited an unprecedented increase in the number of rape convictions in the region where the ABA project is operating. “We often talk of the rule of law in almost ideological or theoret­ical terms,” said Greco. “It is helpful to look beyond them to see the actual impact of programs on our fellow human beings in such need around the world.”