A Lamm Shall Lead 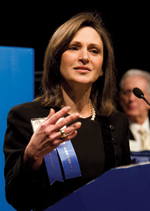 The last time a law­yer from the nation’s capital was nominated to head up the ABA, Dwight Eisenhower occupied the White House.

But in February, the ABA re­turned to Washington’s legal community when Carolyn B. Lamm, a partner at White & Case, was selected to be the association’s president-elect nominee.

A lot has changed in the 50 years since the last D.C.-based ABA pres­ident, Charles S. Rhyne. For one thing, the ABA has significantly increased its presence in the nation’s capital as an advocate for the justice system and the legal profession.

But Lamm says there is room for the ABA to become more effective in its advocacy efforts, within the executive branch as well as Capitol Hill.

As a lawyer who works on high-stakes international arbitrations and has been an active participant in bar activities since the late 1970s, Lamm is highly experienced in the halls of government. She is a past president of the District of Columbia Bar, has served in the ABA House since 1982, and has served as chair of the Standing Committee on the Federal Judiciary, which vets the U.S. president’s nominees to the bench.

“I know Washington well. I’ve practiced there for 30-some years,” said Lamm in an interview after her acceptance speech in the House of Delegates.

“We’re really not at the table for policy development, and we can be much more visible in the adminis­tration and on Capitol Hill.”

Lamm sees an important connection between the need to build the association’s membership numbers and its presence in Washington.

“If your representative capacity is greater and deeper, it gives you a more effective voice,” she said.

In her speech to the House, Lamm invoked Atticus Finch, the iconic lawyer in the novel To Kill a Mockingbird.

“We’ve all wanted to stand with Atticus,” said Lamm. “There are times I’ve felt like I’m standing next to Atticus, but never more so than I do right now.”