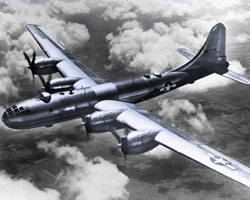 A B-29 Superfortress bomber took off from Robins Air Force Base on Oct. 6, 1948. As it reached 18,500 feet, an engine caught fire and the plane crashed 2 miles south of Waycross, Georgia. Of the 13 men on board, nine were killed, including three civilian employees of the Radio Corporation of America who were testing electronics. The B-29 had been a formidable weapon in World War II, but it had a reputation for high maintenance and failed engines. The widows of the three dead civilians, suspicious of negligence, filed suit against the U.S. Air Force under the Federal Tort Claims Act.

When the widows asked, under the Federal Rules of Civil Procedure, to see the results of the official accident investigation, the Air Force moved to quash the request, claiming that the nature of the aircraft’s mission could not be disclosed. In an affidavit, the judge advocate general argued that the investigative files could not be handed over “without seriously hampering national security, flying safety and the development of highly technical and secret military equipment.” The Air Force even refused to allow the trial judge to review the documents in camera, maintaining that only the government, not the judiciary, could determine what should be withheld to protect state secrets. The trial judge, William H. Kirkpatrick, entered a judgment in favor of the widows. And when the 3rd U.S. Circuit Court of Appeals at Philadelphia affirmed the judge’s ruling, the government headed to the Supreme Court.

For more than 150 years, the nation had survived without a state secrets doctrine. Though the courts treated the government with deference on issues of obvious military secrecy, in tort claims they treated it like any other individual. But on March 9, 1953, in a 6-3 decision in U.S. v. Reynolds, the Vinson court ruled that a government had an established right to privilege, and—comparing it to constitutional limits on self-incrimination—that it could assert that privilege without revealing “the very thing the privilege is designed to protect.” When the matter returned to the lower court, the widows reluctantly settled with the Air Force for a total of $170,000.

In 1996, the Air Force declassified the Waycross crash investigation reports. The documents revealed little about the mission of the aircraft but showed that the fire in the engine was the result of poor maintenance. Though the state secrets doctrine has been widely asserted, especially in the post-9/11 environment, critics contend that the very case that produced the doctrine reveals its potential for abuse.

This article originally appeared in the March 2015 issue of the ABA Journal with this headline: "March 9, 1953: A State Secrets Doctrine Is Born."