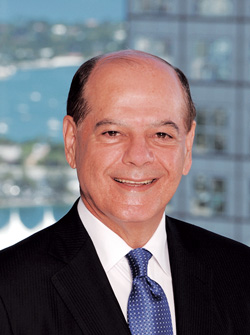 Cesar L. Alvarez fled Cuba with his family in 1960, at age 13. Unlike many political refugees who expected to return within months of the communist takeover, the Alvarez family moved to North Miami and sent him to a school that was mostly Jewish, Irish and Italian and strongly encouraged him to assimilate.

“I don’t think you could find anybody who is more integrated into the United States or who is more grateful than I am for what has happened to me,” says Alvarez, executive chairman of Greenberg Traurig in Miami. “I am not somebody who has spent his life complaining about things that aren’t right. I have always been one to look at the glass as half-full.”

Nonetheless, Alvarez pronounces himself “shocked” at what he has heard about immigration-related ethnic profiling while chairing the ABA Commission on Hispanic Legal Rights and Responsibilities. During the six hearings scheduled for this year, commission members and attendees are to discuss a wide range of issues, such as voting rights, civil rights and access to the courts.

But it is immigration and the political climate surrounding the issue that have dominated the discussions to date, Alvarez says. “The major theme that has developed is that the state of the Hispanic and Latino community in the United States is in significant flux,” he says. “The immigration battle … has created a negative image of Hispanics and Latinos in the United States that has only gotten worse. That has provided a degree of targeting of Hispanics and Latinos … in a way that is unprecedented since I have lived in this country.”

In particular, the Secure Communities program—through which local law enforcement information is shared with the FBI and U.S. Immigration and Customs Enforcement—has led to fears that Latinos will be targeted regardless of immigration status. And it’s led families with mixed immigration status to lay low for fear of being broken apart, Alvarez says.

This has caused families to become homebound: shopping on the Internet, skipping church services and generally avoiding public appearances. It’s even caused issues at the commission’s first four hearings—in Chicago, San Francisco, New York City and Miami. “We have to make sure we have hearings in places where they don’t check identification,” Alvarez says.

Those fearful feelings have affected the justice system in a number of ways, reducing the willingness of those in the Latino community to report crimes, for example, Alvarez says. “That’s what we’re hearing, again and again and again,” he says. “Some police officer feels that somehow [he or she] can target you.”

Such findings point to the need for the commission, which ABA research found is the first of its kind to study the legal rights and responsibilities of the nation’s largest minority group. Hispanics make up 16 percent of the population, according to the 2010 census, says Stephen N. Zack, the first Hispanic ABA president, whose family emigrated from Cuba.

“This commission was long past due,” Zack says. “The understanding of our government, the obligation to vote, the obligation to be jurors—all of these are responsibilities that need to be passed on.” He says it troubles him that only 3.5 percent of the nation’s lawyers are Hispanic, but he is encouraged that the commission’s work has begun to raise the profile of the ABA in the Spanish-language media.

“The best takeaway has been that we’re often told Hispanics have too many things that differentiate them —there are very different kinds of issues in Mexican, Cuban, Puerto Rican communities,” Zack says. “But there’s much, much more that unites us in the Hispanic community. First and foremost, a shared passion and appreciation for the United States and its democratic values. We’re all also very interested in supporting the next generation: our kids, nieces and nephews, cousins, neighbors. We want to create upwardly mobile communities in which we are judged solely on the basis of the good work we do.”

The commission has also observed a respect among Hispanics of the need for a secure border; the desire for a path toward legal work status (with full citizenship a somewhat lower priority); the need to learn English; and the need to promote education in the Hispanic community, both in terms of completing high school but also in terms of civics more broadly, Alvarez says.

“People do understand and are clearly conscious of the fact that we have to have secure borders,” says Alvarez. “You can’t show up here on a Tuesday because you feel like showing up here on a Tuesday. The question is: What reasonable policy can be developed?”

As for citizenship, Hispanic immigrants are realistic, Alvarez says. They would prefer citizenship, but most realize that “citizenship on a blanket basis for 11 million people is not going to happen.”

“A path to citizenship is not necessarily what people want the most. A work permit, the ability to leave home and come back and see their family again [without fear of deportation in the meantime], that tends to be a more realistic approach.”

On the personal responsibility side, Alvarez says some work remains among Latinos. “We need to understand what are the premises that make us Americans: the rule of law, freedom of speech, the independent judiciary, the right to vote.” He says Hispanics also must learn to raise their own educational standards and to vote on an informed basis. But he recognizes there are hurdles to clear.

“Most Hispanics and Latinos come from countries where the legal system is not trusted,” he says. “That carries over here.”

“Census results underscore the fact that the number of Americans who are Hispanic is growing daily, and exponentially,” Zack adds. “So the issues tied to being a citizen are exactly where we should focus: voting, civic understanding, jury service, public service.” Zack convinced the ABA Board of Governors to create a Commission on Civic Education in the Nation’s Schools as a core association effort. It is conducting a separate, parallel civics campaign.

The Hispanic commission, after hearings this summer in Austin, Texas, and Los Angeles, will hold a final meeting in Washington, D.C., Alvarez says. The report should be ready for release in May 2012 to gain maximum attention from Congress, the Obama administration and the Department of Homeland Security.

Before then, the issues will be ranked by priority, identifying those the ABA House of Delegates could reasonably address. The discussion will include input from the 30 commission members, who include national and local leaders in the judiciary, government, civil rights and education communities, and the private sector.

“It has been an interesting journey. It will result in a good report and a well-balanced report,” Alvarez says. “The biggest problem with policy, as it gets implemented in Washington, D.C., is the last 10 yards. How does that translate to that police officer [who stops] that car?”