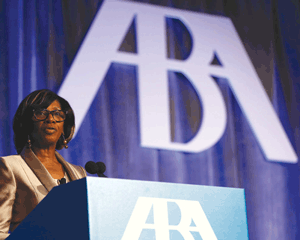 In June, as Paulette Brown was nearing the end of her term as ABA president, she got a nice farewell present from the U.S. Department of Justice.

Having been in contact with various Justice Department officials, Brown knew the DOJ was planning on introducing mandatory training for all federal prosecutors designed to prevent implicit bias—defined as “unconscious or subtle associations that individuals make between groups of people and stereotypes about those groups”—from affecting their decision-making. What she hadn’t expected was the department’s announcement that all its employees, including agents, would be required to receive this training, and that the training process would begin almost immediately.

A statement issued by the Justice Department said this decision would affect more than 28,000 employees, including over 23,000 federal agents from entities such as the Bureau of Alcohol, Tobacco, Firearms and Explosives, the Drug Enforcement Administration and the FBI, as well as some 5,800 federal prosecutors.

The department’s training program was an important acknowledgement of the impact of implicit bias on law enforcement agencies and communities during a summer when news reports highlighted a number of shootings of unarmed black men by white police officers.

“Our officers are more effective and our communities are more secure when law enforcement has the tools and training they need to address today’s public safety challenges,” said Attorney General Loretta Lynch in the news release announcing the program. “At the Department of Justice, we are committed to ensuring that our own personnel are well-trained in the core principles and best practices of community policing. Today’s announcement is an important step in our ongoing efforts to promote fairness, eliminate bias and build the stronger, safer, more just society that all Americans deserve.”

Brown was pleasantly surprised by the announcement. “I was elated because, based on what I had heard, I was under the impression that it would take a longer period of time before it was actually launched,” says Brown of Morristown, New Jersey. She praises the training program for being comprehensive and dealing with the issue in a “nonsuperficial” way. “They hired outside consultants to assist in designing the program, and they’re very serious about it,” she says. “I would say it’s not a program that just hits the main concepts one time and then you’re done. It goes beyond that. They want to make sure their employees fully grasp the issue and understand how it can affect their decision-making in a very real way.”

Brown had made the elimination of all bias, both implicit and explicit, in the legal industry one of her primary goals during her one-year tenure as ABA president, which ended in August. Early on, she appointed the Diversity & Inclusion 360 Commission to create sustainable action plans to increase diversity and eliminate bias within the legal profession. Among its projects, the commission created implicit-bias training videos and toolkits for judges, prosecutors and public defenders.

While that commission was a one-year project, new ABA President Linda A. Klein of Atlanta says it is important for the association to continue its efforts to reduce implicit bias in the profession. “We all have implicit biases to some degree that can cause us to unconsciously assign people into categories based on age, gender, race or other qualities,” she says. “Understanding such bias is important if we are to make fair and just decisions, which is why the American Bar Association has worked to raise the awareness of implicit bias. The ABA is committed to ensuring that our justice system is equitable and impartial. Educating attorneys about implicit bias helps achieve that goal.”

Effective training to address implicit bias requires more than just a few hours in a classroom, says David A. Harris, a leading national authority on racial profiling who took part in an August program held during the 2016 annual meeting in San Francisco on how prosecutors can offset the impact of implicit bias. Harris had a background role in developing the Justice Department’s program and conducts his own training programs on implicit bias.

“In a typical training session, we start with awareness, and that can be done in an hour or so,” says Harris, a professor at the University of Pittsburgh School of Law. “But if you want to understand how implicit bias operates, as well as how it affects your decision-making and how it can affect you without you knowing it, then you must go further. Real training like that can take days.”

So far, Harris says, mandatory training programs for implicit bias are not widespread, although there is growing interest. He notes that, even before the Justice Department announced its staff training program, it proclaimed in March 2015 that six cities would host pilot sites for the National Initiative for Building Community Trust and Justice, designed to foster better relations between police departments and the communities they serve by combating implicit bias while promoting procedural justice and reconciliation.

The ABA House of Delegates adopted a resolution by the Diversity & Inclusion 360 Commission in February encouraging states to modify their mandatory or minimum CLE requirements to include “programs regarding diversity and inclusion in the legal profession of all persons, regardless of race, ethnicity, gender, sexual orientation, gender identity or disabilities and programs regarding the elimination of bias.”

Within a few years, predicts Harris, “we’ll get to the point where this is a standard part of the curriculum. The only question will be whether it’s deep enough so that it’s more than just another addition to the curriculum.”

Brown hopes implicit-bias training will be mandatory in a majority of police departments and other law enforcement agencies in the near future. “I am an eternal optimist,” she says. “I think what happens, in so many instances, is that people have some sort of trepidation of things they are not fully familiar with. Once they see it, they understand that it’s not threatening, and it’s really just a learning process for information that we all need to know.”

This article originally appeared in the December 2016 issue of the ABA Journal with this headline: "An Explicit Step: ABA leaders praise the Department of Justice for introducing a far-reaching training program to recognize and eliminate implicit bias within its ranks."