By Lorelei Laird and Lee Rawles 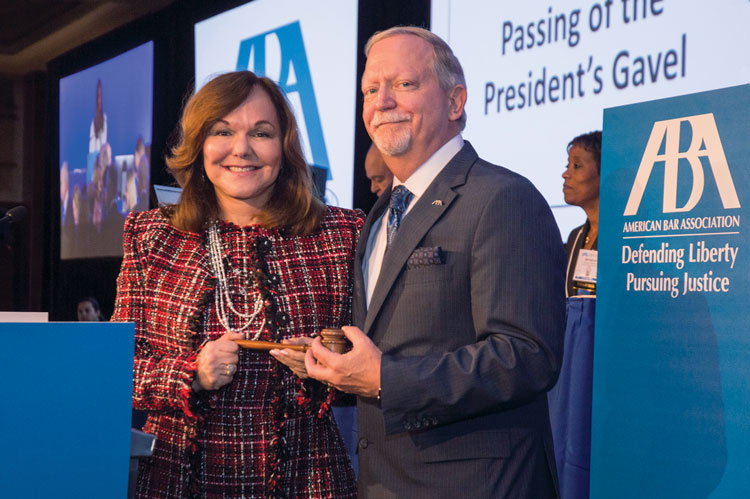 Carlson, whose term began at the end of the House session, emphasized his role as the steward of the ABA.

“It is not about me. It is about the American Bar Association,” said Carlson, a shareholder with Corette Black Carlson & Mickelson in Butte, Montana. “I will do everything in my power every single day to advance our association and fight for America’s lawyers and the public that we serve.”

Carlson noted that the ABA is the only national voice for the American legal profession, giving it the power and responsibility to speak for lawyers.

“Some may say we are driven by ideology, and they are absolutely correct,” he said. “Our ideology is the essential role of an independent legal profession and an impartial judiciary. We are the protectors of equal justice under law in a free, democratic society.” 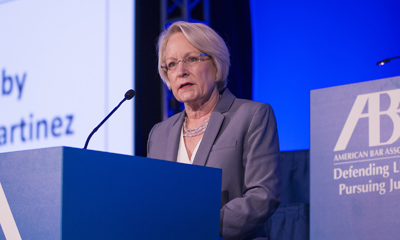 Martinez is of counsel at Simon, Peragine, Smith & Redfearn in New Orleans, and her presidential term will begin in 2019. She called on the association to face its challenges with “smart, resourceful and agile thinking.”

“As to those challenges facing our association, you have already, in this House, undertaken actions during this meeting that will drive greater stability,” she said, referencing the new membership model approved by the Board of Governors and the House. “As to what lies ahead, it will be sacrifice. There must be focus. I will share my commitment to doing what is necessary so that there will emerge an even stronger association.” That ABA will, she said, have the capability to “assist our members as they embrace the changes that lie ahead in the legal sector” and “will help shape those changes.”

And Bass, co-president of Greenberg Traurig in Miami, told the House that she’s proud of all the association has accomplished during her year as president.

She put the main focus on the ABA’s active response to the separation of families at the nation’s southern border, which she saw personally in late June. She recalled her visit to the Port Isabel detention center in Texas, where mothers separated from their children were being held. Many had legitimate asylum claims, she said, but would happily have returned to the dangers they’d fled to get their children back.

“After listening to their heartbreaking stories, I gave them my personal commitment that the lawyers of America would not rest until every one of them was reunified with their children,” Bass said. “We are committed to ensuring that every one of these separated children and every one of their parents who want to make an asylum claim in court will have the legal assistance they need.”

“The ABA has never been more important in the U.S. and throughout the world,” Bass said. “It has been the greatest privilege of my life to have the honor of serving you as president.”