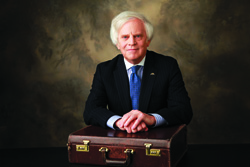 A diversity of perspectives enriches our society and strengthens our institutions. This is why an essential goal of the American Bar Association is to achieve full and equal participation in the association, the legal profession and the justice system by people of all backgrounds, particularly those from underrepresented racial and other groups.

The ABA’s diversity initiatives therefore must continue and thrive. Our programs range from expanding the law school pipeline to enhancing opportunities for lawyers of color in law practices.

One of the most important programs the ABA has ever pursued is the Legal Opportunity Scholarship Fund. In 1999, then-ABA President William G. Paul established the fund to encourage people from all segments of society to bring their perspectives and potential to the legal profession.

Since the fund was created, more than 220 students from diverse backgrounds who lacked financial resources have had an opportunity to succeed in law school and beyond. Scholarship recipients are now contributing their talents as lawyers at major law firms, government agencies and public service organizations.

Scholarship recipient Eric Mackie, raised by a single mother in north Philadelphia, was expected by many to follow in his father’s footsteps and sell drugs for a living. But Eric channeled his energy toward his education. As an undergraduate, he mentored teenage boys in an after-school program in Washington, D.C. Graduating this year from law school, Eric says he hopes to use his JD to inspire more change in communities that others have deemed unchangeable.

Scholarship recipient Jennifer Rodriguez was a foster child who was incorrectly labeled in high school as needing special education. Instead of letting poverty and low expectations define her, Jennifer earned her bachelor’s degree while educating the public on the realities of foster care, and she helped to draft foster care reform legislation in California. Jennifer now uses her legal skills as executive director for the Youth Law Center in San Francisco, which protects the rights of children in the child welfare and juvenile justice systems.

Other ABA programs support and guide practicing lawyers from minority communities. One that celebrated its 25th anniversary last year is the Minority Counsel Program. Only 8 percent of corporate counsel identify as minorities, showing that the program’s work is just as important today as it was a quarter-century ago. The annual conference draws participation from companies such as Microsoft, Wal-Mart and the financial services firm UBS, and focuses on career growth and development for racially and ethnically diverse corporate lawyers. Past conferences included workshops on managing implicit bias and how to use emerging law practice models to navigate the current legal market.

At the 2014 Minority Counsel Program in May in Washington, D.C., programming also will be tailored for government lawyers and lawyers who work as lobbyists in the public and private sectors.

In addition to the activities of the Center for Racial and Ethnic Diversity, the ABA is also a leading advocate for diversity through the Commission on Women in the Profession, the Commission on Disability Rights and the Commission on Sexual Orientation and Gender Identity. Equality and justice are critical components of the ABA’s purpose and mission. Eliminating bias and enhancing diversity in the ABA, the legal profession and the justice system is a continual goal for every project, event and policy we pursue.

This article originally appeared in the March 2014 issue of the ABA Journal with this headline: “Major Push for Diversity: ABA scholarship and other programs broaden inclusion in all areas of the law.”