ABA to hold first midyear meeting in Houston since 1981 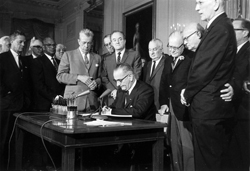 On July 2, 1964, during a live broadcast from the East Room of the White House, President Lyndon Johnson signed the landmark Civil Rights Act. AP Photo

Recent incidents in which black men died during confrontations with police officers—most notably in Ferguson, Missouri, and New York City—have put the issue of race relations in the United States back at the top of the news. Paradoxically, this attention comes at a time when at least two important anniversaries in the nation's efforts to achieve racial equality are being commemorated.

Fifty-one years ago, President Lyndon B. Johnson signed into law the groundbreaking Civil Rights Act, prohibiting discrimination by race, sex, national origin or religion in schools, workplaces, public accommodations and businesses. And this year marks the 50th anniversary of the Voting Rights Act of 1965.

The ABA will mark its own milestone in the ongoing struggle to achieve equality when it celebrates the 20th anniversary of the Spirit of Excellence Awards during the association's 2015 midyear meeting, being held Feb. 4-10 in Houston.

The presentation of the Spirit of Excellence Awards, which are sponsored by the Commission on Racial and Ethnic Diversity in the Profession, has been a highlight of ABA midyear meetings since 1995. Every year, the commission recognizes lawyers who work to promote a more racially and ethnically diverse legal profession. To date, 119 lawyers have received the awards, and another four bar leaders will be added to that honor roll at the awards luncheon on Feb. 7.

This year's award recipients are:

• Kim J. Askew, a partner at K&L Gates in Dallas. She is a past chair of the ABA Section of Litigation, and she currently chairs the Standing Committee on Public Education.

• Robert J. Grey Jr., a partner at Hunton & Williams in Richmond, Virginia. In 2004-05, he was the second lawyer of color to serve as ABA president. He is a special adviser to the association's Rule of Law Initiative.

• Jacqueline H. Nguyen, a judge on the 9th U.S. Circuit Court of Appeals in Pasadena, California.

• Kevin K. Washburn, assistant secretary for Indian affairs at the U.S. Department of the Interior in Washington, D.C.

In addition to recognizing this year's recipients, the Spirit of Excellence Awards luncheon will feature a special video tribute to past recipients narrated by ABA President William C. Hubbard, a partner at Nelson Mullins Riley & Scarborough in Columbia, South Carolina.

Photo of the Houston skyline by Shutterstock.com.

All of the recipients down through the years have something in common, says F. John Garza, chair of the commission and a general attorney at AT&T Services in Dallas. Each year's honorees have expanded opportunities for others while distinguishing themselves as highly respected legal professionals who bring unique and innovative solutions for their clients, communities and the profession, Garza says.

Even after two decades, he says, "it is important that the commission continues to honor individuals who are leading the legal profession to become a more fully inclusive organization. Diversity remains the most valuable asset among us as inclusion of different ideas and perspectives unite and strengthen us."

In a related event, the Section of Individual Rights and Responsibilities will sponsor a program marking the 50th anniversary of passage of the Voting Rights Act. In addition, the Young Lawyers Division will sponsor a Diversity Initiative Expo where ABA entities will showcase their initiatives, including fellowships, scholarships and awards.

Among other events at the midyear meeting, the Task Force on the Financing of Legal Education will hold public hearings on Feb. 6 and 7. The task force is headed by Dennis W. Archer, chair emeritus at Dickinson Wright in Detroit and the first lawyer of color to serve as ABA president, in 2003-04.

The association's policymaking House of Delegates will hold a one-day session on Feb. 9, and the Nominating Committee will meet Feb. 8. The committee is expected to select Linda A. Klein of Atlanta as its nominee for ABA president-elect. Klein, managing shareholder in the Georgia offices of Baker, Donelson, Bearman, Caldwell & Berkowitz, is running unopposed.

This article originally appeared in the February 2015 issue of the ABA Journal with this headline: "Goin' Back to Houston: Spirit of Excellence Awards anniversary event will highlight the ABA's first midyear meeting in the Texas metropolis since 1981."