An A for Alternatives: AFAs Are Here to Stay

By Erik Sherman and Jennifer Tonti 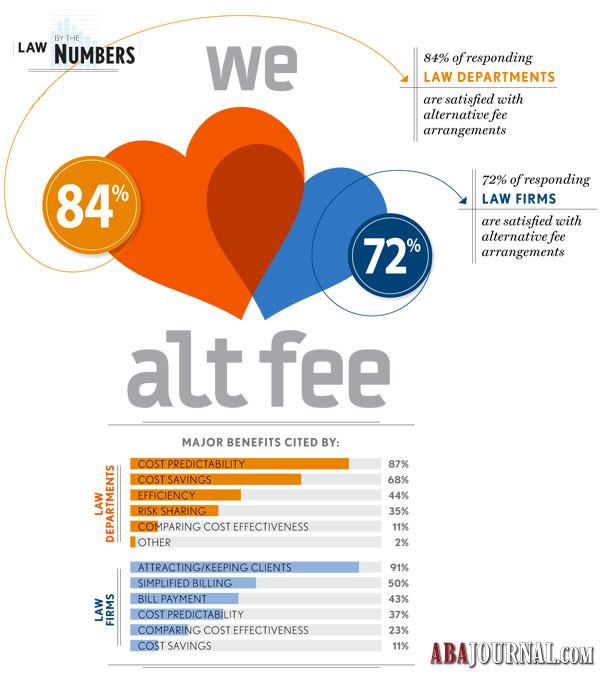 While the study ALM Legal Intelligence did for LexisNexis CounselLink is cautious in its analysis, it shows some progress in the use and the future of alternative fee arrangements, or AFAs, as a replacement for standard billable-hour invoicing.

Citing “the economic collapse of 2008 to 2010,” the study notes, “alternative fee arrangements obtained a new urgency.” Increased use of AFAs shows in the results.

“About 62 percent of firms saw an increase in AFA billing, with only 2 percent citing a decrease. … One in two legal departments saw an increase, and the other half say that the degree of AFA billing has essentially remained the same,” the report says.

Still, both clients and outside firms agree that AFAs are a permanent part of legal services billing, with 88 percent of legal departments and 92 percent of firms saying AFAs are here to stay.

Data was collected via email invitations to a Web-based survey conducted in March and April. Invitations were sent to senior management in corporate legal departments for one survey. Among the responding law departments, 206 opted in to the survey and 141 were qualified to respond because the law department uses AFA billing methods. Invitations for a separate but similar survey were sent to partners at Am Law 200 and National Law Journal 250-size (large) law firms; 218 firms opted in, and 194 qualified to respond.