An interview with the lawyer who discovered Clarence Darrow's letters 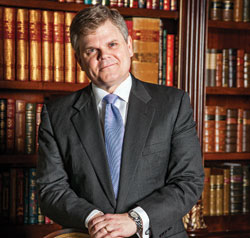 Clarence Darrow is the most famous lawyer in American history. There are many biographies and studies of him and his famous cases. But until now, his letters had not been published. In the Clutches of the Law: Clarence Darrow’s Letters was recently released by the University of California Press. Randall Tietjen, a partner in Robins, Kaplan, Miller & Ciresi in Minneapolis, edited and wrote an introduction to the book. I recently posed some questions to Tietjen, including some about his discovery, in 1991, of hundreds of letters in the basement of one of Darrow’s granddaughters.

What possessed you to seek out the Darrow granddaughters?

I was looking for letters and hoping for permission to publish them. The granddaughters were excited about my project from the start and gave me permission right away. Six months into the project, I drove to Illinois, where one of the granddaughters lived, and her husband and I combed through a basement storage room, where we found hundreds of letters written to and from Darrow, including letters written by Sinclair Lewis, Helen Keller, Upton Sinclair, Theodore Dreiser and other luminaries of Darrow’s day.

Darrow had only one child, Paul; and Paul had three daughters: Jessie, Mary and Blanche. Jessie died in 1968. So Mary and Blanche were the two I knew. They were similar: initially shy, well-educated and -informed, very polite, great conversationalists. I got to know them well. Sadly, they both died before I could finish my book.

What is the single most revealing Darrow letter?

Out of more than 2,200? I’m not sure. One revealing letter was in 1895 to a “Miss S” (possibly Ellen Gates Starr). Darrow was 38. He had been hired by an electric company to obtain amendments to an ordinance granting the company utility-franchise rights. Miss S. had written to Darrow, upset that he was representing the company (which many believed had obtained its franchise by graft). In his long response, Darrow acknowledged his “preaching” and “practicing” had “never been the same,” but he said that he had long ago decided to work within “the system” to change it and to sell his services to anyone, provided that he was not “hurting the poor.”

If you were to write a personality profile of Darrow, how would it read?

Darrow enjoyed the company of friends and the limelight for limited periods—during trials and giving speeches—but he also longed for seclusion, to read books and write. Early in adulthood, he believed in a capitalist economy and institutions of American democracy. But he didn’t hold those views (or many others) all his life. As he aged, he became deeply pessimistic. He had a “strongly emotional nature,” as he described himself, which caused him “boundless joy and infinite pain.” And he had a “vivid imagination” that enabled him to easily empathize with others. He always preferred “diversions to duties,” as he put it. He believed deeply in freedom—free men, free speech, free trade, states’ rights and limited government. He was very much the product of his father, who taught him, as he said, to “question rather than accept.”

What were the most painful years of Darrow’s life?

The most painful year physically would probably be 1907, when Darrow, while defending a man charged with murder, had a severe ear infection—one that left him deaf in his left ear. He described the trial as “one continuous orgy of pain.” Emotionally, the most painful years were probably 1911 to 1913, when he defended the McNamara brothers (they had been involved in blowing up the Los Angeles Times building) and then stood trial himself for jury bribery. [For more, click here.] His letters plead for financial help and try to reassure his son that he would be OK, no matter what the outcome.

Why do you suppose Darrow was so careless in spelling and other matters of form?

If fastidiousness were on a scale of one to 10, my guess is that Darrow would have been a three. That’s his general reputation, too—someone who didn’t care too much. He once told a friend: “I have little desire for immortality, either personal or in the way of remembrance in the future. The logical thing, and to me the inevitable thing, is to be annihilated by the process of decay, and why should I be interested even in the memory of my life remaining.”

Was Darrow a noble figure? If so, why?

If Darrow’s own estimates of the time that he devoted to representing people who could not afford his services is even half the reality, this alone should qualify him as an admirable figure. Darrow said that he gave one-third or half his time pro bono, often representing unpopular clients and causes. Of course, if Darrow tried to bribe jurors to save the lives of the McNamara brothers, then Darrow is both noble and tragic.

What were Darrow’s most admirable qualities?

His sympathy for less fortunate people and commitment to representing the poor. But there were other qualities. For example, in his letters, I rarely saw him angry or disrespectful, even toward people with whom he had great disagreements.

What were the most negative?

Early in his career, he was an ardent supporter of women’s rights. But by the time women finally had the right to vote, he had soured on the idea. (He became convinced that women had teamed up with preachers and reformers to pass Prohibition, Sunday closing laws and other restrictions on liberty.)

What is your personal opinion of Darrow’s alleged jury-tampering? Was he culpable?

The question of Darrow’s guilt or innocence is not nearly as clear to me as it seems to be for others. His recent biographers seem to all believe he was guilty. There was enough evidence to convict, if he and his witnesses were disbelieved. But he wasn’t convicted; and, for me, the evidence is more complicated and less damning than I found it in the biographies. My personal opinion is that Darrow might have done it; but then again, maybe not. How’s that for taking a stand?

Given what you know, what is the best extant biography of Darrow? Why?

John Farrell’s Clarence Darrow: Attorney for the Damned. Farrell did a lot of original research and wrote an intelligent, searching account that is a pleasure to read.

I’m not going to name the book. It’s no longer in print. Biography, as Janet Malcolm has explained, is a “flawed genre.” If you think I’m wrong, read Malcolm’s The Silent Woman and I can almost guarantee that you will never read another biography the same again.

How much will the letters you discovered change the verdict of Darrow biographers?

That’s hard to say. Some biographers, for example, have Darrow’s relationships all messed up: A couple say that he was embarrassed of his first wife; another one says he had a bad relationship with his son; another says or implies that he was a notorious womanizer. The record I found does not support these assertions and often contradicts them.

What was the most difficult thing about completing the book?

How many similar discoveries are out there—discoveries that could transform our understanding of important figures?

The longer the person has been dead, the less likely that we will find anything new. I read not long ago of a recent discovery of some papers of William Faulkner in a barn in Virginia. That’s surprising, but not unimaginable. What is almost unimaginable is if someone found a new play and some letters by Shakespeare in a barn in Stratford. Darrow has not been dead so long that I would be shocked if more letters appeared.

How did Darrow learn to write so well?

Darrow would say that there is a cause for everything, but determining the cause is often impossible. Darrow’s father and mother were apparently very intelligent and well-educated. The education and training he received as a boy—which included Latin and Greek—were likely an important influence on him. He read widely. His mature style of writing was unpretentious. He wrote what he would call “simple and unadorned” sentences. We also shouldn’t forget that Darrow is remembered as a good writer at least in part because he had some interesting ideas. If you don’t have something interesting to say, no amount of style will establish you as a writer.

How did he learn to speak so well?

This is no easier to determine than where Darrow acquired his skill as a writer. One source sometimes overlooked is John P. Altgeld, a judge and governor of Illinois before he became Darrow’s law partner. The year before Altgeld died, he wrote a 48-page book called Oratory: Its Requirements and Its Rewards (1901), which is a marvelous little book of advice for speakers. Much of what Altgeld said in Oratory would seem dated today. He offered advice on everything from voice and gestures to clothing and handshaking. But his goal for oration was simple: Develop a clear, forceful, eloquent and convincing style. That’s what Darrow did in his writing and that’s what he did with his oratory. Without it, he wouldn’t be remembered today.

This article originally appeared in the November 2013 issue of the ABA Journal with this headline: “Inside Darrow: An interview with the lawyer who discovered the icon’s letters.”