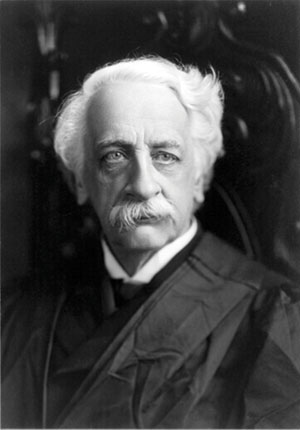 In October 1901, Joseph Lochner, who owned a bakery on South Street in Utica, New York, was indicted and subsequently convicted on two criminal counts of working his employees beyond the hourly limits of the Bakeshop Act, a relatively new state law that limited the working hours of bakery employees to 10 hours per day and 60 hours per week.

The New York legislature had enacted the law in 1897, spurred by the Journeymen Bakers’ National Union and a muckraking public health exposé in the New York Press about the state’s abundant bakeries headlined “Bread and Filth Cooked Together.” But Lochner’s challenge to his conviction and a $50 fine brought public focus to the longstanding clash between the progressive public welfare agenda and laissez-faire capitalism’s hold on the courts.

As his appeal moved through New York’s appellate courts, Lochner picked up an unlikely ally in Henry Weismann, who as former international secretary of the Journeymen Bakers’ National Union had a major role in the passage of the labor law Lochner had violated—only one of the many contradictions that marked his life.

Like Lochner, Weismann was a German immigrant. As a youth, he had immigrated to San Francisco, where he worked as a baker and confectioner before becoming a member of the Socialist Labor Party. He also became a member of the Anti-Coolie League, a group opposed to Chinese immigration. And after a brief prison term for illegal possession of explosives, he arrived in New York and became editor of The Bakers’ Journal, a union newspaper published in English and German.

But after becoming a master baker, Weismann opened two bakeries of his own, sparking what he later referred to as “an intellectual revolution” that left him disenchanted with the Bakeshop Act. And having graduated from Brooklyn Law School in 1903, Weismann not only threw his support to Lochner but became Lochner’s lawyer.

Approaching Lochner’s case with the eye of a businessman, Weismann argued on appeal that the Bakeshop Act unconstitutionally interfered with the right of journeyman bakers to contract their own work agreements. It was an argument that dovetailed with the “social Darwinism”doctrine of Herbert Spencer, whose philosophy of “survival of the fittest”—an oversimplification promoted by Spencer himself—was embraced by businessmen of the time.

Weismann’s argument built steam even with his defeats in New York’s appeals courts. But at the U.S. Supreme Court, his argument found its voice in a 5-4 ruling on April 17, 1905, in Lochner v. New York. Writing for the majority, Justice Rufus Peckham declared the New York labor law an unconstitutional use of state police power against an individual’s right to contract, and he declared the law itself a public health pretext designed to prevent small independent bakeshops from competing with larger, often union-affiliated bakeries.

“Clean and wholesome bread does not depend on whether the baker works but 10 hours per day or only 60 hours a week,” Peckham wrote. “The [Bakeshop] act is not, within any fair meaning of the term, a health law, but is an illegal interference with the rights of individuals, both employers and employees, to make contracts regarding labor upon such terms as they may think best.”

In a long and careful dissent, Justice John Marshall Harlan argued that state laws should be overturned only under the strictest of constitutional circumstances. In a pithier and less-careful dissent, Justice Oliver Wendell Holmes Jr. assailed the majority for bending to their own economic ideology a Constitution “made for people of fundamentally differing views.” He noted that the individual’s right to contract has been routinely restrained for the public good “by every state or municipal institution which takes his money for purposes thought desirable, whether he likes it or not.”

Even after it was effectively overturned in 1937, Lochner endured as a source of anger and invective among populists and progressives who found resonance in Holmes’ concern about an activist, ideology-driven judiciary. And when the court changed to favor the New Deal policies the Lochner court would have abhorred, laissez-faire conservatives came to agree.