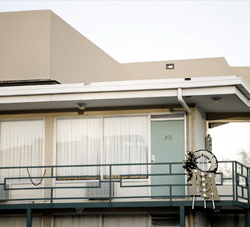 On March 28, 1968, Martin Luther King Jr. arrived in Memphis to lead a march in support of 1,300 striking sanitation workers. But the protest was quickly aborted after several youths broke ranks and smashed storefront windows along Beale Street. By nightfall, 4,000 National Guardsmen had been called in to enforce a curfew.

The day’s events left King embarrassed and dispirited, but he resolved to return and lead a peaceful march, determined to prove that his nonviolent strategy remained viable. King flew from Atlanta to Memphis on April 3, his flight delayed by a bomb threat.

He was served a temporary restraining order that afternoon; that evening he addressed a rally at Mason Temple. He spoke with anguished eloquence about the rights being denied the striking workers and, on a wider level, of the need to “develop a kind of dangerous unselfishness.” He also spoke of his own death: “Like anybody, I would like to lead a long life—longevity has its place. But I’m not concerned about that now.” At 6 p.m. the following evening, King was felled by a sniper’s bullet as he stood on the second-floor balcony of the Lorraine Motel. He was 39 years old.