Are legalistic labels a bad habit or a necessity? 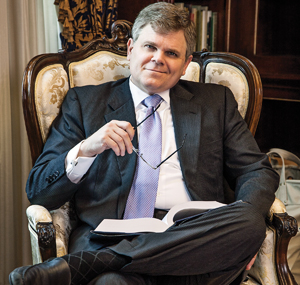 Sometimes you'll study a point of technique, experiment some, steep yourself in the literature relating to it, experiment some more, and finally arrive at a strong conviction about what's almost invariably the best approach—often with the help of teachers. I once did that with the golf grip, and I had pretty strong opinions on the subject even before I met the late Harvey Penick. He was my golf teacher for many years, and he would later publish the best-selling sports book of all time: his Little Red Book. He coached me from ages 12 to 18.


Fortunately, our views about the proper position of the hands already coincided precisely. Anyone would have found it impossible to persuade either of us—or any other adept golfer—that the right thumb really belongs on the underside of the club at address. Impossible.

Is there an exception for which that might be the right position? Of course: If you're a right-hander whose ball is lodged against a tree, and you're having to execute a left-handed shot by turning the clubhead of a long iron upside down, and you're adopting a southpaw grip (left hand atop the right hand), the right thumb will go straight down the natural underside of the club. What could be more obvious?

And you thought this to be a column about legal writing. Well, it is, and I've been analogizing.

Something as basic to golfers as how to hold a golf club is like the decision lawyers face about how to refer to the parties in litigation. It's fundamental.

Just as any pro will tell you that most golfers have faulty grips (most golfers don't play very well), I've long believed that most lawyers adopt faulty conventions in their writing (most haven't learned to write all that well). One of the common faults—and this is a decades-old conviction of mine—is what I've considered the bad habit of using legalistic labels for parties: Plaintiff, Defendant, Appellant, Appellee, Third-Party Defendant, etc.

Or so I've thought.

What's wrong with using those labels throughout a brief or judicial opinion? First, they're generic—hence not vivid. Second, they strip litigants (especially criminal defendants) of their identities: They become indistinct and to some extent unreal. Imagine reading a story about Lover No. 1 and Lover No. 2, or about Protagonist and Antagonist. Third, they're soporific—hence boring. Isn't that enough in itself? As 18th century French writer and philosopher Voltaire once said, every style is good except that which bores.

Harvey Penick might have said that all styles of golf are good except those that add strokes.

The idea of calling parties by name is something experts have long agreed on. Says who? Mike Tigar, James McElhaney, Mark Herrmann and many another teacher of advocacy. I've devoted eight pages to the subject in The Winning Brief. Justice Antonin Scalia and I exhort advocates to use real names in our book Making Your Case: The Art of Persuading Judges.

Do I allow exceptions? Yes, three: (1) If your client is Adolf Hitler; (2) if you're in a class action and a class noun is necessary; (3) if your criminal-defendant client's name is Mersky and that also happens to be the judge's name. In those situations, you're executing a left-handed shot with an upside-down, right-handed club.

Imagine my astonishment in recent months at encountering adamant opposition to using real names, from prosecutors and public defenders alike (civil litigators generally give no resistance). The subject didn't provoke classroom riots, exactly, but something very near.

In separate sessions in different parts of the country, the prosecutors didn't want to "humanize" the defendant, and neither did the defenders because their clients are generally so unsympathetic. The prosecutors were most adamant about the point. Their firm convictions were opposite mine. Militantly so.

Believing that the policy should be the same for briefs and for judicial opinions, I put the question recently to 15 judges and lawyers whose judgment I respect. Their answers fell almost equally into three categories: (1) It depends; (2) use positional labels; (3) use names. Their arguments for the first and second categories made me appreciate that there are better arguments for them than I had previously thought.

The "it depends" category allows more fluidity than my three narrow exceptions do. Jonathan Rosenberg of New York City responded as follows: "I generally agree with you and typically follow the naming-names approach, but I don't think the practice necessarily has to be uniform.

"As a former AUSA, for example, I can sympathize with a prosecutor's desire to dehumanize those from whom he's trying to strip liberties. But even a prosecutor will sometimes want to sprinkle the defendant's name in certain contexts, such as when he's writing about a repeat offender, someone accused of particularly heinous crimes or someone with a notorious reputation.

"And by the same token, there may be circumstances where I wouldn't want to bind myself to using a civil-litigation adversary's name, such as where that adversary is favorably viewed and is litigating in its home court."

Several respondents were flat-out against my recommendation. Professor Ronald Rotunda of Chapman University said that "the judges are supposed to see the legal issue and decide that objectively. It should not matter if the defendant has a WASP name or an ethnic name." Judge Jim Rosenbaum of Minneapolis expanded on this view: "The use of names is not quite as fair and freely expressive as your view seems to imply. Names like Goldberg, Latricia, Yellow Feather, Marciano, Johnson-Smith, X (as in Malcolm), or many others you can easily—but probably uncharmingly—think of, can carry a lot of baggage that may well infect impartial decision-making."

Judge Rosenbaum pointed out there's a philosophical basis for his position: "It seems to me that, in a criminal case (and, even as you suggest—in civil cases) we are not trying 'Mr. Jones' or 'Ms. Smith' for something. We are trying a person—irrespective of who that person might be—for having done something. If they did that for which they have been accused, they are guilty; if the government doesn't prove they did all elements that comprise that offense, they are not guilty.

"We are not judging them personally, but we are judging their acts. The essence is that the charge is, in fact and properly, depersonalized. It is depersonalized for a reason. The reason is that by making the charge objective, we eliminate (or at least minimize) the 'infections' that personalization can induce.

"We carry this further, in the Rules of Evidence. Rules 404(b) and 608(b) are explicitly designed to limit and restrict the extent to which we look at the 'person' and particularly the 'whole person.' Their history and their backgrounds are designed to be excluded, or at least restricted, from the calculus."

Judge Susan Graber of the 9th U.S. Circuit Court of Appeals at San Francisco shares this view: "Our decisions are not personal. We do not reach a particular outcome because the defendant is John Doe or the prosecutor is Jane Smith. Also, the principles that we establish are general, rather than personal, and apply to other, similarly situated litigants."

Then there was the third category—the proponents of naming names. The responses of this type carried convictions every bit as strong as those in the name-no-names category. Professor Robert Weisberg of Stanford University was absolute: "While I have dismissed as sentimental the idea that using real names positively 'humanizes' the parties in some morally significant way, it's hard to take seriously the prosecutors' normative argument that we should dehumanize. And what defense lawyers fear is beyond me. Go for the vivid and concrete."

Two noted Chicago practitioners are like-minded. Brian D. Sieve of Kirkland & Ellis told me: "I have always used names, not labels, in my briefs. Using names improves the flow of the brief and makes it easier to read. If an associate uses a label in a draft, I change it immediately." And Suyash Agrawal of Agrawal Evans responded: "Use names rather than labels. It improves comprehension at every level."

Similarly disposed is Judge Margaret McKeown of the 9th Circuit, who said: "I am a huge fan of calling parties by their names. What's in a name? Everything. To begin, the cases, our decisions and the consequences center on real people and entities, not abstract concepts like appellant or defendant. The parties deserve the dignity of the court, not the dustbin of historical labels."

So there you have three viewpoints forcefully expressed.

Have my own views changed? A mite, yes. I have a greater appreciation for the philosophical basis for those who take a rhetorical position contrary to mine. It has long been said that the law "is no respecter of persons." That means merely that the law does not regard who this or that person is in the community: It applies to all alike. Fair enough.

But your mind is something that only you can make up. I encourage you to ponder your present practice and to decide consciously whether it represents your considered opinion on the subject.

This article originally appeared in the April 2015 issue of the ABA Journal with this headline: "A Plaintiff by Any Other Name: Are legalistic labels a bad habit or necessary, at least sometimes?."

Bryan A. Garner is co-author (with Jeffrey Kuhn) of The Rules of Golf in Plain English and (with Justice Antonin Scalia) of both Making Your Case: The Art of Persuading Judges and Reading Law: The Interpretation of Legal Texts.