Lawyers, students use marketing tactics they can deploy from their desks 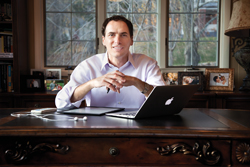 Raise your hand if you have great ideas (or skills) to promote, but just haven't found the time to get them off the ground.

"One of the biggest problems lawyers have, whether it's with marketing or succession planning, is implementation," says John Olmstead, president of Olmstead and Associates, a legal management consultancy in St. Louis.

Ari Kaplan couldn't agree more, and he believes it's because there's no accountability.

"The idea is to get you to execute what you know you need to do to be successful," says Kaplan. "That includes networking, outreach initiatives, content creation and distribution, which are all techniques for raising your profile."

That's something Kaplan has done personally. In 2006, after practicing for nine years, he struck out on his own to become a writer. Since then, he's published articles, books, white papers, case studies and client profiles. He then created a program to teach lawyers how to get published, and followed that with a training program on networking and other ways to get noticed.

"I'm always interested in what other people are doing, interesting exercises they're involved in, challenges and solutions to their challenges," Kaplan says. "And I try to share those."

Through Lawcountability, lawyers watch a live, 10-minute online video feed each week (also available on demand) featuring Kaplan walking them through a tactic to market themselves. He also assigns three follow-up tasks, each of which they'll get an email reminder to do. Firms pay $39 per user per month for up to 12 users; 13 or more users pay a group fee starting at $499 monthly.

The lawyers at Sutherland Asbill & Brennan signed up, says Lewis Wiener, a partner in the firm's Washington, D.C., office. "Ari will say, 'Go to LinkedIn. You have on LinkedIn the ability to send updates. While we're talking, click on this button; and while we're here, type something in the update bubble that lets people in your network know what you're up to,' " he explains.

Wiener had just written a case update for clients. So during that video session, he posted it to LinkedIn. That day, Wiener adds, about a dozen of his LinkedIn contacts responded to his post.

The lawyers at Mirick, O'Connell, DeMallie & Lougee in Boston also find value in Lawcountability, says Diane Power, executive director. However, they've asked Kaplan to dial back the notifications, which can feel like pestering. The program also allows users to compete against each other in completing tasks. Power says those gaming features also got panned because they made busy lawyers who couldn't get to them right away feel bad, like they were losing a competition.

Lawcountability JD is similar but doesn't offer the live feed. Schools pay $1,500 per academic year to offer it to students.

Halley Tucker, a second-year student at St. Mary's University School of Law in San Antonio, says she's gained confidence from the sessions. Last year, Tucker was hesitant to introduce herself to, say, a speaker after a seminar. "I'm just a 1L," she thought. "Why would anybody want to talk to me?"

Turns out some people wanted to do just that. After tapping into the videos, Tucker had the pluck to network at a recent event and got two requests for information, one of which resulted in a fall semester job offer.

This article originally appeared in the January 2015 issue of the ABA Journal with this headline: “Armchair marketing: Lawyers, students use tactics they can deploy from their desks.”