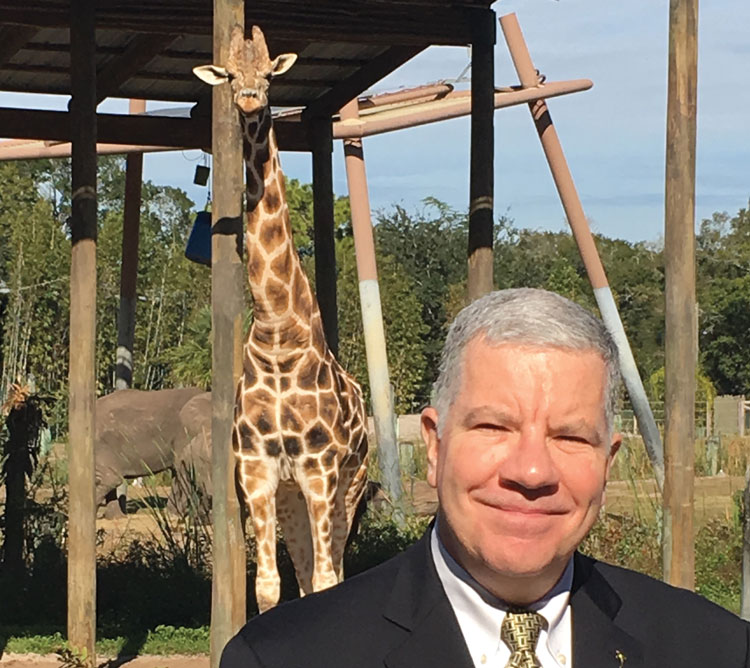 James F. Gesualdi was only a year into his practice of law in 1989 when a trip to a dolphin sanctuary changed the course of his career—and his entire life.

Gesualdi’s mother, knowing of his fascination with dolphins, showed him information about the Dolphin Research Center in the Florida Keys. A group was about to take a weeklong visit to the center, and he asked if he could join them—even though it turned out to be a group of cancer patients and survivors. They agreed.

As the only male and only person who wasn’t a family member, he says the group taught him “what strength, courage and dignity were all about and put the so-called stresses of a young lawyer in perspective.”

Gesualdi also met Little Bit, one of the dolphins who starred in the television series Flipper, which he loved as a child. He was moved by her beauty and grace and remembers that all he wanted to do was sit on the shoreline and watch her.

“I absolutely fell in love with her,” he says. “She inspired me, and that was for me a very transformative experience. That’s what started me on my animal law practice.”

At the time, Gesualdi was an associate at White & Case in New York City and Washington, D.C. He began helping the Dolphin Research Center with federal regulatory work on a pro bono basis. He became active in marine mammal law, representing clients such as the Alliance of Marine Mammal Parks and Aquariums, an international association and accrediting body for marine parks, aquariums, zoos and research facilities.

In the mid-1990s, he also provided legal counsel to the marine mammal community’s Working Group on the Reintroduction of Marine Mammals to the Wild and commentary on the U.S. Department of Agriculture Animal and Plant Health Inspection Service’s negotiated rule-making and update to marine mammal regulations.

These early experiences inspired Gesualdi to not only pursue a broader career focused on animal welfare, primarily as it relates to zoos and aquariums, but to also try to build consensus between all of the groups that have concerns about the well-being of animals.

“One of the things I have tried to do throughout my entire career is be a good listener and understand different perspectives,” says Gesualdi, who is now a sole practitioner in Islip on Long Island in New York. “It has made me a better lawyer, and I’d like to think it has made me a better person. That is equally important.”

Through the 1990s and into the 2000s, Gesualdi split his practice between animal law and land use and municipal law. He decided to focus on the former in 2006, after the unexpected death of his brother-in-law and the realization that the two practices kept him traveling and working into the evenings.

Gesualdi concentrates on legal, regulatory and strategic matters related to animal welfare and wildlife conservation, and he works extensively with matters related to the U.S. Animal Welfare Act, “the only federal law that regulates the treatment of animals in research, exhibition, transport and by dealers.”

He also calls for continuous advancements in animal welfare, and in 2014, he published the book Excellence Beyond Compliance: Enhancing Animal Welfare Through the Constructive Use of the Animal Welfare Act. He combines lessons he learned throughout his career to outline a model nonregulatory program for zoological organizations that want to implement higher standards than those required by the federal law.

“What my philosophy is about is when we look at the law, particularly as it relates to animals and the act, that’s the starting point of our responsibility,” Gesualdi says. “If we are fortunate enough to have animals entrusted to our care, we also commit to continuously improving ourselves and their well-being every day.” 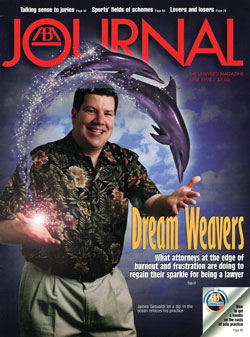 Gesualdi appeared on the front cover of the June 1998 issue of the ABA Journal.

While Gesualdi continues to provide proactive advice to zoological associations, he also receives calls from organizations dealing with tragedies. They often need help figuring out what happened and how to make changes for the future.

In July 2017, he received one of those calls from the South Florida Museum in Bradenton, Florida, after Snooty, the world’s oldest-known manatee, went missing the day after his 69th birthday. Snooty was found drowned in an underwater plumbing area in his habitat.

Gesualdi conducted a site review, interviewed staff and examined records and security footage. He also considered relevant laws, professional standards and internal policies, and the culture of the organization before providing a report on the factors that led to Snooty’s death and recommendations on new procedures that could prevent similar accidents.

Martha Wells, the chief community engagement officer at the Bishop Museum of Science and Nature, as it’s now known, met Gesualdi early in his career and knew he would guide the museum’s board of trustees through the moral, ethical and legal work required of them in a way that no one else could.

“He had the expertise that I believe is truly unique and also the genuine personal mission of doing what is right for the animals, which is what we also wanted,” Wells says. “Jim was able to do that compassionately and honestly because he is a man of impeccable integrity. He helped us be the best we could be.”

While the recommendations Gesualdi made in Snooty’s case have fueled much of his work with other organizations, he also aims to keep learning and improving his approach.

“Every situation is different, and over the years, I have made lots of recommendations, and changes have come from difficult situations,” he says. “A year or two later, I realize that some of these ideas I had were good ideas, but they weren’t good enough. I try to make them better.”

Gesualdi became involved with the ABA after he graduated from Hofstra University School of Law in 1988 and served as vice-chair of the Young Lawyers Division’s Animal Protection Committee.

In his current role as a vice-chair of the Tort Trial & Insurance Practice Section Animal Law Committee, he has mentored many younger members and helped with outreach on several initiatives, including the resolution that called for the protection of military working dogs adopted by the House of Delegates in February.

Last year, Gesualdi also assisted Jane McBride, then-chair of the Animal Law Committee, by contacting more than 200 members to discuss their interests and ask how the committee could help them with their practice. They created a membership subcommittee to review the responses and the packet of information that is now mailed to new members.

“Jim is just the nicest guy in the world,” McBride says. “He gives you this warmth and interest in connecting with you. He has played an incredible role in the animal law world, and he’s very determined to bring people together and create whatever context he can for people to understand each other.”

Gesualdi was honored by TIPS in May 2019, receiving the Excellence in the Advancement of Animal Law Leadership Award for his leadership and exceptional work in advancing the humane treatment of animals through the law.

In addition to his ABA involvement, Gesualdi served as one of the founding members of the New York State Bar Association Committee on Animals and the Law and as founding co-chair of the Suffolk County Bar Association Animal Law Committee.

He also taught animal law as a special professor of law at his alma mater and writes a monthly column for the San Diego Zoo Global Academy, an online learning platform that seeks to elevate the knowledge and professionalism of the zoological community.

“The practice of animal law, like life itself, is all about raising consciousness,” Gesualdi says. “That is, raising our individual and collective consciousness about our treatment of other living beings as well as our treatment of each other. When we do this constructively, we make this a better world for nonhuman animals and people, too.”

This article appeared in the June/July 2020 issue of the ABA Journal under the headline: “Making Waves: Attorney has worked for 30 years to improve well-being of animals.”