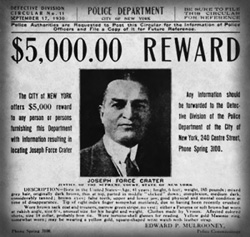 New York State Supreme Court Justice Joseph Crater abruptly left his summer cabin in Maine in early August 1930 and returned to Manhattan after taking a call that seemed to put him out of sorts. He is said to have talked of having “to straighten those fellows out” and promised his wife that he’d return the following week.

The morning of the 6th, Crater went to his office, gathered several files of papers, some of which he disposed of, and had $5,150 withdrawn from two accounts. He later dined on West 45th Street with lawyer William Klein and showgirl Sally Lou Ritz. Around 9 p.m. the trio parted ways: Klein and Ritz got in a cab, Crater walked away—and was never seen again.

In time Crater would be dubbed the “Missingest Man in America.” But he wasn’t missed immediately, as a formal police report wasn’t filed until Sept. 3, by which time his trail had seemingly gone cold. Crater was an ardent skirt chaser, leading some to speculate that he’d fled with a mistress, while others held that he was the victim of political chicanery—possibly tied to the Tammany Hall corruption probe then under way. We’ll likely never know what became of “Good Time Joe.” Although the NYPD closed its file on Crater in 1979, his story lives on in popular folklore.