Bar Exam? There's an App for That

When Mike Ghaffary decided to take the California bar exam, he did what most other young lawyers do: He enrolled in a bar review course.

In exchange for a four-figure fee, the bar review course provided Ghaffary access to a series of lectures, books, outlines, checklists and other information designed to help him study for the state’s three-day exam. Though he passed the bar exam on the first try when he took it in early 2009, Ghaffary says the review process left him cold.

“It was very inefficient,” says Ghaffary, who graduated in 2006 from Harvard University with a combined JD/MBA and now works in business development for a technology company in Silicon Valley. He complains that the lecturers and the course materials in each subject covered by the bar review course were inconsistent. “I thought that there had to be a better way.”

Ghaffary, a self-described standardized test whiz, says he learned the material best while listening to the lecturers on his iPod while he jogged. He figured there had to be others like him who wanted a different approach to studying for the exam.

He soon put his complaints and his high-tech connections to work and came up with an idea for a complete bar review course as an application for the Apple iPhone and iTouch. “There is tremendous value to having the portability,” he says.

With his board of advisers, Ghaffary developed BarMax, an app that he says is a complete bar review course for the California and Multistate bar exams, with original, proprietary materials for the iPhone, iTouch and the new iPad. Ghaffary says he and his business partners funded the technology themselves, but he declined to reveal the development costs.

The app debuted in January and quickly gained notoriety for its eye-popping thousand-dollar price tag. (It’s said to be the most expensive app in Apple’s App Store.) 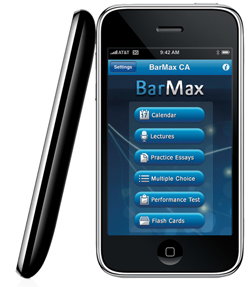 But Ghaffary says the BarMax app should really be getting attention for its content, which includes an entire bar review course, with audio lectures, outlines, checklists and a calendar that schedules the bar exam taker’s preparation for any given time period chosen by the user. The app also includes 1,300 real bar exam questions that he licensed from the National Conference of Bar Examiners, according to Ghaffary.

BarMax, however, has competition. BAR/BRI, the 40-year-old bar review stalwart, introduced an app last fall that offers students enrolled in its classes access to lectures and other materials, including practice test questions and outlines.

Emanuel Bar Review also launched a series of apps, priced at $12.99 each, for a variety of subjects for the Multistate Bar Exam, including evidence, property and constitutional law.

Representatives from both companies echoed Ghaffary’s philosophy about the need for portability in today’s on-the-go society. Few students want to lug around heavy books, when course materials instead can be digitized for a cellphone that slips easily into a purse or pocket, they say.

Ghaffary welcomes the competition. “We are glad that options for bar prep software are increasing,” he says.

Ghaffary declined to reveal sales figures for the BarMax California app. But sales must be strong enough to warrant the development of additional state-specific bar review apps. In April, BarMax released an app for the New York bar exam (which also includes MBE prep), and Ghaffary says development is under way for Florida, Illinois, Massachusetts, Texas and Washington, D.C. The company also offers a free app for the professional responsibility portion of the exam.