Bellows: ABA Should Be a Part of Public Debates 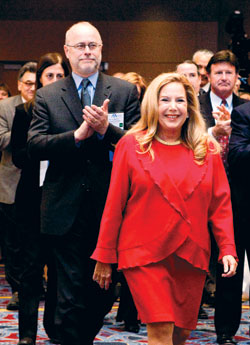 Laurel Bellows: “For lawyers to matter… our voice must be heard.” Photo by Marc Mauldin

ABA president-elect nominee Laurel Bellows told the ABA House of Delegates meeting in Atlanta that the association should address the balance of individual liberties and national security in a more direct, forceful manner than it has in recent years.

Coming after a series of ABA presidents who have largely shunned issues beyond the core concerns of the legal profession, Bellows’ speech to the House sounded a clarion call for the ABA to return to taking positions on matters of wide public debate.

“Our inalienable rights seem at odds with government intrusions into our liberties in order to protect our national security, which is truly under attack,” she said. “Fair and impartial judges are tossed off the bench because voters disagree with decisions grounded in law.”

“Lawyers are not leading the debate on these great issues,” she said. “I know there’s a lot to be said for staying out of policy debates—for the ABA to be only a trade association of lawyers, for lawyers.”

“But I don’t believe we live by bread alone. I believe that the mission of the ABA goes beyond making us better lawyers and helping us put bread on the table. Lawyers want us to speak out on matters that affect lawyers and issues that define us as Americans. For lawyers to matter and for this association to truly matter, our voice must be heard on the great issues—issues that affect the rights and liberties of all Americans.”

“My vision for the ABA is that we lawyers do what we are trained to do. Let us take the lead in framing the debate on the great issues which affect the rights and liberties of all Americans,” Bellows said.