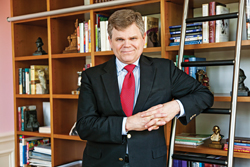 The Library of Congress has staged a magnificent exhibit on Magna Carta and its history. It is, after all, the 800th anniversary of the Great Charter of 1215. To commemorate the event, Justice Randy J. Holland of the Delaware Supreme Court has edited a book to accompany the exhibit: Magna Carta: Muse and Mentor, for which Chief Justice John G. Roberts Jr. has written a foreword.
When Justice Holland asked me to contribute one of the 15 essays in the book, I decided to take a lexicographic look at the phrase. There are many curiosities about both the phrase Magna Carta and the document it denotes. Very little about Magna Carta is simple or straightforward.

WHAT IS THE PREDOMINANT SPELLING?

Originally, the predominant form was Magna Charta, which long held sway. At its height, Magna Charta was nearly 10 times as common as Magna Carta. But the two spellings had a significant reversal of fortune in the late 20th century.

In 1926, when H.W. Fowler wrote the first edition of his A Dictionary of Modern English Usage, he said: "Magna C(h)arta. Authority seems to be for spelling charta and pronouncing /kar´ta/, which is hard on the plain man. But outside of histories and lecture rooms the spelling and pronunciation charta will take a great deal of killing yet." In his 1965 revision of that book, Sir Ernest Gowers introduced an excellent update: "In a bill introduced in 1946 authorizing the trustees of the British Museum to lend a copy to the Library of Congress, Charta was the spelling used. But when the bill reached committee stage in the House of Lords, the lord chancellor (Lord Jowitt) moved to substitute Carta and produced conclusive evidence that that was traditionally the correct spelling. The amendment was carried without a division, so Carta has now unimpeachable authority."

Though Charta vastly predominated before the mid-20th century, it now seems archaic. What an astonishingly swift reversal of linguistic fortune.

HOW ARE THE VARIANT FORMS PRONOUNCED?

Editor's note:
Although the ABA Journal prefers "the Magna Carta," in keeping with American popular usage and the Associated Press Stylebook, for the purposes of this month's Bryan Garner on Words, we are publishing his preferred version of the term.

All the usage guides [see editor's note, right] prefer omitting the definite article before Magna Carta. The traditional reason for omitting the article is twofold: (1) the name is being used as a proper noun, and (2) in Latin the phrase doesn't take an article, and early anglicizations followed the Latinate word pattern.

TO WHICH KING SHOULD MAGNA CARTA BE CREDITED?

To the nonhistorian, this is really odd. Most of the early dictionaries give the year 1225—the ninth year of King Henry III—as the year for Magna Carta. Dozens of English dictionaries say this, beginning with John Cowell in his law dictionary of 1607. How can this be?

The answer is that the 1225 version of Magna Carta is the one that became incorporated into British statute law. Here's how the thorough 19th-century lexicographer Alexander Burrill explained it: "This charter of Henry III is the Great Charter—which is always referred to as the basis of the English constitution—the charter of John being only remembered as a monument of antiquity. ... The charter of Henry is the oldest printed statute now extant in England. ... The original charter of John is still preserved in the British Museum." King John's Magna Carta was declared a nullity by the pope just a little over two months after it was sealed.

So the early legal lexicographers had reason to prefer citing the third reissue and crediting Henry III. But historians and schoolchildren alike care more today about the original 1215 date than 1225. That was the momentous year.

WHAT IS THE PRECISE DATE OF KING JOHN'S MAGNA CARTA?

Some dictionaries give the date as June 15, 1215. Others give June 19, 1215. This contradictory information counsels in favor of having lexicographers and encyclopedists avoid undue specificity. The Oxford English Dictionary, for example, says Magna Carta was "obtained from King John in 1215" and leaves it at that. This may be a wise solution, since "the chroniclers give various dates to the settlement, ranging from 18 to 23 June." Only one major dictionary—the now-defunct Funk & Wagnalls New Standard Dictionary of the English Language (1943)—gives an account that seems to reflect the most reliable modern research: "dated June 15, 1215, but actually sealed (not signed) and delivered June 19, 1215, by King John at Runnymede." Except John probably did not seal the document either: That responsibility fell to a member of the Chancery staff. But June 19 seems to be the best guess for the document's taking effect.

WHAT DID WILLIAM SHAKESPEARE AND SAMUEL JOHNSON HAVE TO SAY ABOUT MAGNA CARTA?

Nothing. Absolutely nothing. The various Shakespeare concordances have no listing of Magna Carta. Somehow Shakespeare's play King John (1596) deals with baronial rebellion all the way through John's death without a whisper about Magna Carta. As the variorum edition notes, the play contains "not the faintest allusion ... to the constitutional struggle which ended in the grant of the Great Charter," adding: "Startling as it sounds to modern ears, it is almost certain that Shakespeare had small knowledge of that document, and a very inadequate sense of its importance." This despite the playwright's extensive legal knowledge. Perhaps this paradox can be explained partly by the low ebb that Magna Carta had reached in the 15th and 16th centuries. Or the omission may have resulted from Shakespeare's dramaturgical strategy, although some have suggested that King John is more subject to criticism by lawyers than any other play for precisely this reason. One historian of the English Renaissance doubts that Shakespeare had even heard of Magna Carta.

As for Samuel Johnson, his 1755 A Dictionary of the English Language has no entry for the phrase. Nor is there any reference to it in the entry for charter, although Johnson does say this: "Charters are divided into charters of the king, and charters of private persons." Not until the Rev. H.J. Todd's revision of 1818, more than 30 years after Johnson's death, did an entry appear in an edition of Johnson's dictionary. It read in full: "Magna Charta. n. s. [Latin.] The great charter of liberties granted to the people of England in the ninth year of Henry III, and confirmed by Edward I."

Did Johnson discuss Magna Carta in any of the copious conversations recorded by his biographer James Boswell? Apparently not. No reference appears even in his voluminous letters.

WHICH LEXICOGRAPHER MOST VIVIDLY DEPICTED THE SCENE AT WHICH MAGNA CARTA TOOK EFFECT?

Giles Jacob in 1729, but the description wasn't of King John at Runnymede; it was of Henry III late in life. It was the reaffirmation of Magna Carta in the 37th year of Henry III's reign—a down-the-line reissue of the charter. The scene took place at "Westminster Hall. And in the presence of the nobility and bishops, with lighted candles in their hands, Magna Charta was read—the king all that while laying his hand on his breast, and at last solemnly swearing faithfully and inviolably to observe all the things therein contained, as he was a man, a Christian, a soldier and a king. Then the bishops extinguished the candles and threw them on the ground; and everyone said, 'Thus let him be extinguished, and slink in hell, who violates this charter.' "

This article originally appeared in the January 2015 issue of the ABA Journal with this headline: "A Magna Carta Style Guide: From Charta to Carta and which king should get credit for the Great Charter."


Bryan A. Garner (@bryanagarner), president of LawProse Inc., has been the editor-in-chief of Black's Law Dictionary since the mid-1990s. He is the author of more than 20 books on legal writing, advocacy, jurisprudence, and English grammar and usage, as well as a translation into plain English of the rules of golf.