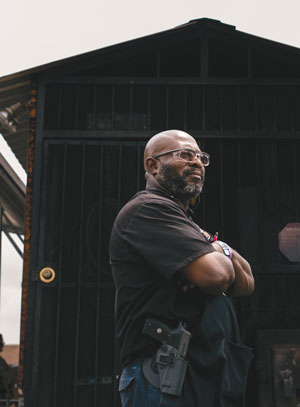 There are a few constants at Brooks' Place, a smokehouse barbecue in Cypress, Texas, near Houston: You can buy brisket or ribs by the pound, owner Trent Brooks always mans the pit, and he's never without his gun.

He doesn’t mind if his customers are packing heat, either. In fact, Brooks encourages them to come hungry and come armed.

“I should have the right to protect myself from the evil in this world,” says Brooks, whose restaurant, a metal trailer parked at the edge of an Ace Hardware lot, has been broken into twice.

Texas began allowing people to openly carry holstered handguns this past January. It’s one of 44 states where the practice is legal, but Second Amendment scholars say that it’s still rare for people to actually do it.

That may shift, as more people are buying guns. According to a 2015 report by the U.S. Bureau of Alcohol, Tobacco, Firearms and Explosives, gun production nearly doubled between 2010 and 2013. And in December 2015, 1.6 million guns were sold in the United States, the highest sales in 20 years, according to the New York Times.

Businesses have the right to ban guns from their premises, and owners call the shots depending on where they fall on the Second Amendment. Brooks is far from gun shy, and he offers all customers who bring firearms to his restaurant a 10 percent discount on food. Sales have gone up since, he says, though some customers found the offer offensive and vowed not to return.

Texans have been allowed to carry concealed firearms since 1995 as long as they’re holstered, and as long as the gun owners have a license to carry, referred to as an LTC. Texans must be at least 21 to get an LTC, (unless active in the military) and may be turned down if they have felony convictions, some misdemeanor convictions, substance dependency and certain psychological diagnoses.

Open carry also requires an LTC, but that doesn’t mean gun owners can take their weapons just anywhere. Texas, like many states, bans guns at courthouses and polling places. Churches, hospitals and nursing homes can ban weapons at their discretion.

“I think the general consensus was that open carry puts businesses in an awkward position,” says Stephen Barth, an attorney who teaches hospitality law at the University of Houston’s Conrad N. Hilton College.

Business owners who want to keep guns out of their establishments must put up signs stating that entering with a gun amounts to trespassing, says Kimberly A. Frost, a liquor lawyer with Austin’s Martin Frost & Hill.

Some establishments fear that trespass signs detract from the ambiance, so they choose instead to tell customers verbally or hand out fliers. That requires employee training, says Ann Price, an employment partner with Boulette Golden & Marin in Austin.

“If people are openly carrying because they have strong opinions on what the Second Amendment means, employees need to be trained on how to respectfully navigate that discussion,” she says.

Alcohol complicates the situation in many states, including Texas. For the most part, guns are banned at Texas bars. That’s because the state made it unlawful to bring a handgun into any business where alcohol consumed on-site makes up more than 51 percent of annual sales, and the establishment does not have a food-and-beverage certificate.

But if owners don’t mind, those with a license to carry a gun can bring weapons into establishments, such as restaurants, where the percentage of alcohol sales makes up 50 percent or less of annual revenues.

The Texas Alcoholic Beverage Commission requires businesses to post signs letting customers know whether they can openly carry guns inside. Bars, where open carry is prohibited, post “red signs,” while restaurants where gun owners can buy a drink with dinner post “blue signs.”

When the open-carry regulation became law, blue-sign businesses feared they’d be responsible for making sure that any customer who entered with a visible, holstered gun had a license to carry. The TABC clarified in February that there was no such requirement, says Chris Porter, the agency’s public information officer.

“If you read the code, there could be action taken against them if an unlicensed handgun is brought in, but in 20 years since the law existed, the TABC has never prosecuted a business for that,” he says. “If a shooting does take place, there’s usually a litany of other things we might investigate.”

David Kopel, a Denver lawyer and research director of the Independence Institute, a non-profit public policy organization, says some businesses opt for open carry to make the idea of being armed appear less radical and more normal.

He says it’s “sort of like 20 years ago, when [gay couples] started walking down the street holding hands. “When people started doing that, they got some odd stares, but now it’s perfectly normal.”

Colorado does not require a license to carry a gun openly, Kopel says, because it’s considered a constitutional right to keep and bear arms. However, the FBI conducts background checks, as it does in all states, when someone buys a gun from a federally licensed dealer.

On the other hand, concealed carry in Colorado requires a permit from the county sheriff. Applicants must be at least 21 years old, Kopel says, pass a fingerprint-based background check and take a gun safety class.

Massachusetts allows gun owners to openly carry weapons with a permit, but few do, says Boston lawyer Andrew Upton, a partner with DiNicola, Seligson & Upton who focuses on government relations and administrative law. Police departments are responsible for issuing gun permits, he says, “and they would say that open carry is threatening and calls into question your discretion.”

Some of his clients don’t want people bringing guns into their businesses, but they also don’t want to post signs saying as much, Upton says. “Because it might frighten customers who think that means they might find guns inside,” he explains.

When it comes to where and how people carry guns, public opinion has a stronger influence than legislation, says David Hardy, a Tucson, Arizona, lawyer and Second Amendment scholar. Arizona does not require any kind of license or permit to carry firearms—either open or concealed—and there are few restrictions on where you can take them.

Unlike Texans, Arizonans are not required to keep their handguns holstered. “Anyone who carries a Glock in their waistband is a fool, though—Glocks don’t have thumb safeties,” says Hardy, referring to a popular semi-automatic pistol.

Even though some question the wisdom of people who choose to openly carry guns, Hardy says that 20 years ago people feared the idea of concealed carry.

The first American gun law was passed in 1813, Hardy says, when Kentucky banned people from carrying concealed weapons. Such laws became a trend in frontier states, he adds, but Eastern states didn’t restrict concealed carry until the 1890s, when they started to adopt permit systems for guns. “The law was that you could always carry openly, but never carry concealed,” Hardy says. “If somebody had to conceal their gun, they might be up to something.”

Hardy carries a holstered gun when he goes shooting, and he brings a pistol loaded with birdshot for hiking trips, in case he runs into rattlesnakes. The area of Tucson where Hardy lives hasn’t had a violent crime recently, so he sees no need to carry a gun on a regular basis.

Others feel differently, which Hardy says is evident with increased gun sales. “Vastly more people are interested in having guns. I suspect it’s going to be more liberalized as far as where you can carry.”

This article originally appeared in the July 2016 issue of the ABA Journal with this headline: “Carry In—or Out: Business owners grapple with serving armed customers.”