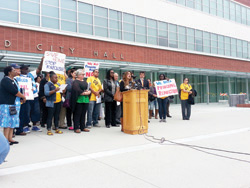 Community activists gather at a rally in support of Richmond’s plan to use eminent domain to help homeowners avoid foreclosure. Photo courtesy of ACCE.

In the Bay Area, foreclosures are a tale of two economies. In San Francisco, real estate company Zillow says home values are down by only single-digit percentages from their peak. The same is true of its wealthiest suburbs.

But across the bay in Richmond, home values were down more than 50 percent from their 2007 peak as of December. Though Richmond has some pricey homes near the ocean, the bulk of the city is working class, built around a Chevron oil refinery. Zillow estimates that about a third of its homes were underwater in December, meaning the homeowners owed more on their bubble-era mortgages than the homes are now worth.

That’s bad news for Richmond, because economists say being underwater is one of the best predictors of foreclosure. And widespread foreclosures generate a range of problems for cities, including blight, crime, falling property values and lost tax revenues.

In Richmond, vacant properties became such a problem that in 2008 the city fined banks $1,000 a day for each foreclosed property with code violations; it had issued $1.8 million in fines by November 2011. HUD statistics say one foreclosure costs its local government an average of $19,227. With hundreds of potential foreclosures, Richmond could be looking at tens of millions in costs.

That’s part of why it adopted a creative and controversial plan to stop foreclosures with eminent domain. Using funds from a private investment firm, the city plans to buy loans and simply reduce the principal owed. The borrowers get a more sustainable mortgage payment, while the city gets more stable neighborhoods and the new investors get interest income. Even the loans’ prior owners can benefit, if they get payment for loans that might otherwise go into foreclosure.

Cornell University law professor Robert Hockett, one of the inventors of the plan, wrote a 2013 research paper titled “Paying Paul and Robbing No One.” But owners and trustees of the loans strongly dispute the notion that no one is being robbed. There has been a backlash against the plan, including bank lawsuits, threats from a federal regulator and Wall Street warnings that it will make home loans more expensive.

And some eminent domain experts see legal problems. While this kind of taking might generally be permitted, they say, opponents might have other strong grounds to challenge its constitutionality. With other U.S. cities seriously studying this use of eminent domain, a lot could ride on Richmond’s success.

The idea of using eminent domain to address foreclosures came independently from three different law professors: Hockett, who has spoken about the issue the most in the press; Lauren Willis of Loyola Law School in Los Angeles; and Howell Jackson of Harvard.

They say market forces (and sometimes legal contracts) prevented banks from forgiving loan principal, even though it was generally in their own best interests. Eminent domain is a way around that. A friend of Hockett’s, New York City attorney and banker John Vlahoplus, took up the cause when he co-founded Mortgage Resolution Partners, a San Francisco investment firm formed to connect investors with cities using eminent domain this way.

Richmond wasn’t the first local government to consider the plan, but it might be the boldest so far. Others—notably, California’s San Bernardino County—ultimately backed away, concerned about litigation exposure and lack of community support. (Indeed, opinion is divided within Richmond.) As of January, several more cities were considering it, including Seattle and two towns in New Jersey: Newark and Irvington.

Richmond’s plan, called Richmond CARES (short for Community Action to Restore Equity and Stability), teams up with Mortgage Resolution Partners to target underwater, securitized loans held by private trusts (rather than government-sponsored enterprises Fannie Mae or Freddie Mac). Many, but not all, of the loans’ payments are current. Vlahoplus says the city chose these because the borrowers can still avoid foreclosure, and also qualify for government refinance plans important to the effort.

Both lawsuits were dismissed, but attorneys for the lenders said they would be back. In the meantime, in August investors further expressed their concerns by spurning a highly rated $34 million bond offering put up by the city. And in the same month, the Federal Housing Finance Agency issued a statement threatening to sue any city that adopted such a plan, or stop business within the city’s limits.

Eminent domain experts say courts probably will permit this kind of taking. Under 2005’s Kelo v. City of New London, the U.S. Supreme Court said a valid public purpose—a requirement of eminent domain under the Fifth Amendment—can be broad, including transferring property to a private party for redevelopment.

“But that doesn’t mean there aren’t any serious constitutional problems with it,” says Ilya Somin, a law professor at George Mason University who is working on a book about Kelo.

One of the constitutional problems Somin sees is “just compensation” under the Fifth Amendment. California law further defines this as the price a willing buyer would pay a willing seller.

MRP’s marketing materials (filed as exhibits to the bank lawsuits against Richmond) cite a hypothetical home currently worth $200,000, for which a city could offer $160,000—80 percent of the home’s current market value.

Vlahoplus vehemently denies that Richmond is offering 80 percent of home value across the board. He says the offer price is based on an individual appraisal of each loan—not the home itself—taking into account its expected cash flow, risk of default and the likely future value of the home.

But even if the payment for the loan itself is fair market value, Loyola Law School professor emeritus Gideon Kanner says investors would also be able to claim “severance damages.” That’s payment for the reduced value of the remaining property after a partial taking—such as when a city takes the best part of a parcel of land.

The other constitutional issue Somin sees is related to the commerce clause. The bank lawsuits alleged that Richmond CARES impermissibly interferes with interstate commerce, since trustees, loans and investors are often located outside California.

And it raises a tough related issue: Where exactly are these loans located? Local governments may not condemn property outside their own territory—and the mortgages are unlikely to be within Richmond.

In fact, says Anthony Della Pelle, an eminent-domain expert and a shareholder at McKirdy & Riskin in Morristown, N.J., this could complicate lawsuits by creating multiple potential venues.

“Let’s say you have real estate in New Jersey subject to a mortgage issued in New Jersey, and that loan was then sold to an investor that is an investment firm based in California,” says Della Pelle. “And then the agreement itself says it will be construed according to New York law. Where does it go?”

In cases where litigation could be fierce, this kind of issue could raise the costs of eminent domain—and potentially scare municipalities away. But that’s not a consideration for Richmond, because MRP has agreed to cover the legal bills for Richmond CARES. And Vlahoplus isn’t worried about prolonged litigation: “All the pooling and servicing agreements that govern these trusts say the servicer should treat any litigation … the way it would in its own business. We expect that they’re required by those agreements to settle the cases.”

This article originally appeared in the March 2014 issue of the ABA Journal with this headline: “Homes 4 sale, bay vu: California city seeks eminent domain to bail out foreclosures.”

The print and initial online version of “Homes 4 Sale, Bay Vu,” March, should have stated that Mortgage Resolution Partners’ marketing materials cite a hypothetical home currently worth $200,000, for which a city could offer $160,000—80 percent of the home’s market value. It also should have said New York City attorney, banker and MRP co-founder John Vlahoplus denies that the city of Richmond, Calif., is offering 80 percent across the board.