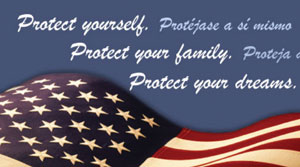 In 2013, a deal on immigration reform seemed imminent in Congress. So imminent, in fact, that law enforcement in California started noticing an uptick in immigration law scams.

"One of the examples of what we saw was attorneys who are publicizing that if you give us $500 now, ... we can begin your immigration paperwork now; and once immigration reform passes, you will be at the front of the line," says David Torres, a member of the State Bar of California's board of trustees. "Those types of promises are obviously false."

The congressional bill never passed, but the California legislature did pass AB 1159, which was intended to clamp down on those scams. Among other things, it included a provision that made it unauthorized practice of law to literally translate any English-language terms falsely implying that the advertiser is a lawyer. That includes the Spanish-language word notario.

As a companion effort, the state bar launched a consumer education campaign, including in-person “town hall meetings.” That campaign got a boost in March, when the state bar uploaded two Spanish-language videos explaining the scams, how to check a lawyer’s credentials and how to file a complaint against a lawyer.

Notario fraud exploits a difference between the legal systems in the U.S. and many Latin American countries, where a notario is a kind of lawyer. Because the Spanish word translates to the English word notary, scammers—estafadores—can advertise as notaries and convince Spanish-speaking immigrants to pay thousands of dollars for work they’re not qualified to perform.

Notario fraud is a longtime problem in states with large Spanish-speaking communities, which is why the ABA Commission on Immigration runs a Fight Notario Fraud project. Past ABA President Stephen N. Zack publicized the issue during his 2010-2011 term.

Torres says there were notarios saying they would get immigrants to the head of the line if they paid $25,000, “or ‘I know a certain immigration agent,’ which is all false. And these folks, of course, being vulnerable prey, would give them their last cents.”

This article originally appeared in the September 2015 issue of the ABA Journal with this headline: “Proceed with Caution: The State Bar of California has launched a new effort to fight notario fraud.”