Calling on Congress: Lawyers from 50 States Advocate for Vital Funds and Legislation 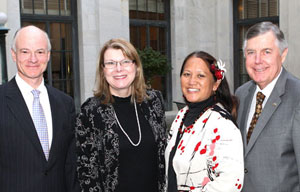 Every day, or so it seems, our federal government makes decisions that affect how we practice law. From April 17 to 19, 340 lawyers traveled to Washington, D.C., to tell legislators how those decisions affect us, the clients we serve and those who do not have a voice in the halls of Congress or access to our courts.

ABA Day 2012 was a historic event, because all 50 states were represented for the first time and because it had the largest attendance of lawyer volunteers ever. For Margaret Masunaga of Hawaii, the trip was both professional and personal. “One of my friends from law school … is a victim of domestic violence by her … now ex-husband,” said Margaret, an advocate for reauthorization of the Violence Against Women Act.

Lynn Allingham traveled from Anchorage, Alaska, to explain to her congressional representatives how cuts in legal services are hurting the most vulnerable in her state.

“A lot of people are falling through the cracks and not getting the services they need,” Lynn said, noting that a pro bono program in Alaska was defunded recently because of cuts to the Legal Services Corp.

Because the ABA is nonpartisan and does not have a political action committee, our influence in Washington relies on our professional expertise and our ability to translate our interests into personally compelling experiences with demonstrable consequences, like the troubling issues described by Margaret and Lynn. (For more on their stories and ABA Day, see “All In” on page 62.)

This year state, local and specialty bar leaders descended on Capitol Hill to discuss three important issues with their representatives in Congress: critically needed funding for the LSC, support for the Crime Victim Restitution and Court Fee Intercept Act, and reauthorization of VAWA.

The LSC is a vital program that deserves our support. In these difficult economic times, fewer and fewer have the means to afford legal representation. In fact, more than 63 million Americans, including 22 million children, qualify for civil legal aid. The LSC provides grants to 135 independent local programs, and grantees operate legal aid programs in each of the 50 states.

With $50 million cut from its budget this year, many programs expect to downsize or close offices entirely. The LSC estimates that more than 80,000 low-income people will not receive the assistance they need to ensure meaningful access to justice.

We also urged members of Congress to co-sponsor a bipartisan, cost-neutral bill called the Crime Victim Restitution and Court Fee Intercept Act. This bill would help victims rebuild their lives and provide crucial revenue to our struggling state courts by intercepting tax returns of scofflaws. In essence, tax refunds would be used to pay overdue court-ordered debts through an efficient federal collection program already in place.

Since its passage in 1994, VAWA has provided life-saving assistance to hundreds of thousands of women, men and children who are victims of domestic violence, sexual assault and stalking. We know this law works by saving lives and money. In the last 20 years, the number of people killed by an intimate partner has declined by 34 percent for women and 57 percent for men. VAWA programs also reduce the costs of violence, such as health care expenses, lost productivity at work and lost earnings.

ABA Day is an annual, inspiring reminder that we must remain vigilant to advocate for programs and legislation that advance the rule of law and serve our members. It is also a reminder that we have a talented and effective staff of nonpartisan lobbyists who are dedicated to this task every day. As a community, we will only be successful if we work together—the ABA and state, local and territorial bar associations—on the pressing issues facing our profession.

As I reflect on the 16th year of this event, I know we would not have achieved success without the superb efforts of our chair, William Hubbard, and the staff in our Governmental Affairs Office. Upward and onward toward ABA Day 2013!