David Dillon loved law school, especially the criminal justice clinic. His law professors say he was a natural in the courtroom and a zealous defender of the underprivileged. There was never any doubt that he would be an extraordinary advocate.

“F. Lee Bailey wrote a book that said you have to do your homework, that you have to understand the case better than the prosecutor,” says Dillon, a 1976 graduate of Southern Methodist University’s Dedman School of Law. “I learned that I couldn’t successfully tackle an issue or problem until I understood it from every possible direction.”

Employing this principle for the past 25 years, Dillon has experienced extraordinary achievement and has become the unequivocal leader of his profession. His career has thrived. His firm’s revenues dwarf even those of the largest law practices in the world.

But Dillon has never tried a lawsuit or even practiced law. Instead, he is chief executive officer of the Kroger Co., the largest grocery store chain in the country, according to Fortune, with revenues of $76 billion.

“I love selling groceries,” he says. “I went to law school not to be a lawyer but to study how society operates and to learn why we don’t kill each other. The rule of law has a lot to do with that.”

Dillon is an example of a new trend among the nation’s largest corporations to select lawyers to lead their conglomerates. Nine of the Fortune 50 companies now have a lawyer as chief executive, up from three just a decade ago. In December, Bank of America and Continental Airlines became the two most recent publicly traded corporations to do so. Also in 2009, Citigroup named Richard Parsons, another lawyer, as its chairman, which is separate from the CEO.

Business leaders and corporate headhunters agree that the JD is once again an alternative to the MBA as the degree of choice for CEO candidates, and that the trend is very likely to increase over the next decade. 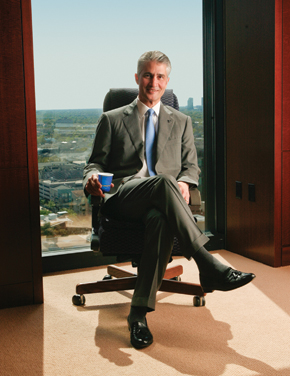 Of those nine top-level lawyers turned CEOs, three received their law degrees from SMU in Dallas, two from Harvard, and one each from Duke, Notre Dame, Columbia and Emory (see chart, page 35).

“It is all about the feeder pool of candidates,” says Chad Holliday, a former CEO of DuPont and now a member of the Bank of America board of directors. “Many of the best and the brightest over the past 30 years have gone to law school, so they are natural candidates.

“My guess is that this is a trend that will continue for some time,” he says.

There’s no better example than the Sarbanes-Oxley Act.

“Corporate executives and board members used to have the attitude: ‘You do the law and we will handle the business side,’ ” Bradford says. “But that line has become blurred. Today a more holistic view is welcome. After all, the [U.S. Securities and Exchange Commission] is now requiring a risk assessment on disclosure on 10-Ks on issues such as climate change.”

There are certain industries, such as those in highly litigious fields or with significant governmental regulatory oversight, where having a lawyer as CEO is logical. Some examples:

• Wall Street analysts applauded in 2006 when Pfizer Inc. promoted its general counsel, Jeffrey Kindler, to CEO, citing his management of the pharmaceutical giant’s expansive and burdensome litigation docket and its success in shepherding projects through the massive bureaucracy that is the U.S. Food and Drug Administration.

• On Dec. 15, 2009, Bank of America stunned Wall Street by naming Brian Moynihan as its top executive. Moynihan was a Boston corporate securities lawyer who went in-house for his client, Fleet Bank, in 1993 and then helped Fleet merge with Bank of America.

• In 2007, WellPoint Inc., the nation’s largest health benefits company, named Angela Braly as its CEO. Just eight years earlier, Braly had been a partner at a St. Louis law firm before being named as WellPoint’s general counsel.

“For many years, lawyers were overlooked for the chief executive spot because they were viewed as being too risk averse,” says E. Allan Lind, an expert on management leadership at Duke Uni versity’s Fuqua School of Business. “But now risk management is highly valued. So there’s a thinking that what we tried before—namely people with a finance background—didn’t work, so we need to try something else.”

Corporate management analysts say they knew the lawyer-turned-CEO trend was legitimate when it expanded beyond the financial, pharmaceutical and insurance industries to other fields, such as airlines, retail sales, health care, global shipping and garbage disposal.

But the reasons are the same: increased governmental regulation and the need to navigate international laws and treaties due to expansion.

The CEOs say the skills learned in law school and developed in legal practice can be applied in any profession or industry.

“The CEO role requires the ability to constantly break down problems and analyze issues that are at the core of a decision,” says Continental Airlines CEO Jeff Smisek, a former corporate lawyer in Houston. “As leaders we need to be persuasive to many constituencies in communicating our strategic vision and describing the path where we will take our business. All of those requirements rely in no small part on skills I developed in law school and honed as a practicing lawyer.” 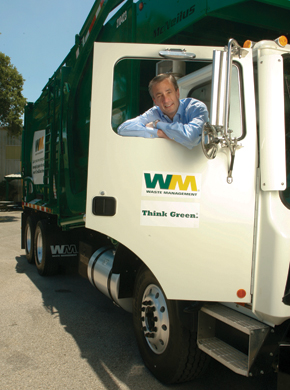 Waste Management Inc. CEO David Steiner, a former partner at a law firm in New Orleans, uses nearly identical words when asked to discuss the advantages of being a lawyer in the chief ex ecutive’s chair.

“As a lawyer, you learn how to break down an issue and to analyze it,” he says. “Lawyers are taught how to look and understand both sides of an issue because it helps you make a better decision. As a lawyer you are trained to think, ‘The way I’m looking at this may not be the right way.’ We are taught that a slight change in the facts can have a dramatic change in the outcome.”

Steiner says that the expanded role of general counsel due to increased legal and regulatory is-sues has raised the profile and visibility of those lawyers within the cor porate setting.

“You may be the most capable person in the world, but if the board doesn’t know your name, you don’t have a chance at promotion,” Steiner says. “There are three people who are always at every board meeting—the CEO, the CFO and the GC.”

Corporate executive recruiter Kathryn Griffin of Washington, D.C., points out that Braly, Moynihan, Steiner and Smisek all were previously outside counsel representing a corporate client on a wide array of business law matters—a corporate client that would later hire each of them as general counsel and eventually promote them to lead the company.

“The specialization of the legal practice, be it energy or banking or insurance or groceries, has forced the outside counsel to develop a depth and breadth of knowledge of their particular industry,” Griffin says. “The private corporate law practice requires the lawyer to be an expert on the industry of their clients.”

Braly, Moynihan, Steiner and Smisek share another common factor: All worked for a time in nonlegal corporate disciplines after being general counsel but before being named CEO.

“The leaders who are most successful,” says Dillon, “are those who can think and achieve outside of their specific silo or discipline, and are able to look at the broad interests of the business.”

But at the end of the day, the CEOs say there is only one thing that can place the general counsel in the line of succession: results.

“The general counsel has to do more than just give a legal report. He or she needs to come up with business solutions to problems,” Steiner says. “There are going to be plenty of times when we as lawyers are going to say no. But we need to be able to help the board find an answer.

“I don’t think these boards of directors are turning to lawyers because they are lawyers,” he says, “but because these lawyers also happen to be very good businesspeople.”