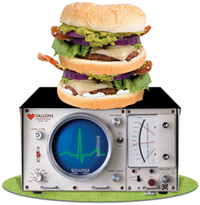 Someday in the distant future, when anthropologists are wondering why the average American has to be weighed on a truck scale, their research will take them back to the early 21st century, when supersizing ruled the day and any pretense of healthy eating was dropped. Menu items such as the Double-Bypass Burger and Chili Chest-Pain Fries told it like it was.

But that time is now, so let us examine the current battle between two would-be kings of conspicuous caloric consumption.

Jon Basso, proprietor of the Heart Attack Grill in Chandler, Ariz., filed a lawsuit Jan. 26 in the U.S. District Court for the Southern District of Florida against Heart Stoppers Sports Grill in Delray Beach, Fla., claiming some 30 similarities in theme, appearance and promotions.

Both establishments are medically themed, the idea apparently being that you’re there to indulge in food and drink so unhealthy that you’ll be lucky to make it out alive.

Basso has already thrown his weight around by shutting down another perceived copycat, the Flatline Grill in Pensacola. In a published account of the case, Basso’s lawyer, Robert Kain of Fort Lauder dale, said the main beef with Heart Stoppers is the medical theme. Kain also points out similar signage and the same offer of a free meal for customers heavier than 350 pounds.

The account also quotes the lawyer for Heart Stoppers, Eric Lee of Boca Raton, as saying the restaurant’s theme “is completely different.” He says that while Heart At tack attracts a “Hooters-type crowd,” Heart Stoppers caters to families.

A court will digest the facts of this case. In the meantime, praise the lard and pass the Bromo.