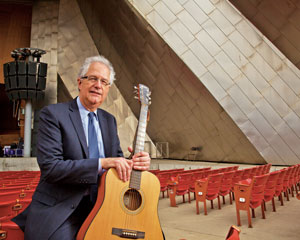 Tom Leavens and Derek Holland are living the dream.

Leavens, a partner at Leavens, Strand & Glover in Chicago, rocks all things legal for the three-day Pitchfork Music Festival held there every July. Holland does the same for the four-day Firefly Music Festival in Dover, Delaware, every June. And yes, their roles are just as awesome as they seem.

“This is my dream job,” gushes Holland.

“It’s totally cool,” chuckles Leavens, whose firm has opened an office in the music mecca of Nashville, Tennessee. “You would not believe the dad points I get for being involved with Pitchfork.”

Technically, their jobs are much bigger than overseeing the legal score for a music festival. Leavens is general counsel for Pitchfork Media Inc., which began with an online publication covering the music industry. His work for Pitchfork includes intellectual property, contracts and the usual tasks lawyers do for any client running a business, like employment and office leasing.

TUNED FOR THE TASK

Each man came to the job from a different path. Leavens plays guitar “not really well, but well enough to amuse myself” and was in a folk group in high school. In law school, he worked for A&M Records. And his job immediately after passing the bar was as the first attorney-director for Chicago’s Lawyers for the Creative Arts, which provides free legal services to artists in a range of fields.

“My practice has always been broadly based,” Leavens says. “That reflects the opportunities I’ve had and also the fact that in Chicago, I think it would be hard to be an attorney just in one area—just to do music; just to do film; just to do TV. You might be able to do that in Los Angeles or New York, but not in Chicago.”

Holland, on the other hand, took piano lessons growing up, but admits it wasn’t a deep passion for music that led him to Red Frog (where all staffers have informal titles; his is “juggler of justice”). The long-distance runner grew up in Toronto and landed in the U.S. on a college athletic scholarship. After law school, Holland was a litigator at a New Hampshire firm, but he also sought work in other areas.

“I dabbled where I could,” he recalls. “So I felt like I was a good candidate for an in-house position. Red Frog came on my radar because of my passion for running.”

After reading a newspaper article about Red Frog, Holland told his wife that if it ever hired a lawyer, that would be his dream job. When Red Frog posted that very position three months later, it got 1,000 hopefuls. Holland was the standout of the 40 who were granted interviews.

“I think I really was able to convey that I didn’t want to be the suit in the corner,” Holland says. “I love that I get these terrific ideas coming across my desk that range from hot-air balloons over a music festival … to having clues in our urban scavenger hunts that required participants to pet a tiger or rappel down the side of a building. I’ve always approached them with: What can we do to do this well and safely and to reduce our exposure?”

Leavens feels the same charge: “There’s so much at stake with an opportunity, and the talent will sometimes be blinded as to the realities of the deal being presented to them. They see this as their chance, and they don’t want to blow the deal.

“What keeps me awake at night,” he says, “is that tension of keeping them protected and not interfering with that opportunity.”

This article originally appeared in the August 2015 issue of the ABA Journal with this headline: “Music Men: Chicago attorneys get top legal billing for festival gigs.”