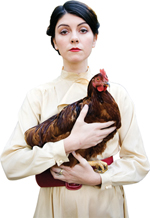 If, five years ago, you asked members of local government in a major city what was likely to be one of the hot-button issues of today, it is unlikely that chickens would have made anyone’s top-10 list. But since that time, the “locavore” movement has taken off and, with it, hatched a surprising new legal problem for local governments nationwide: urban chickens.

There are no nationwide statistics on urban chicken farming. But the website BackYardChickens.com now counts some 30,000 members and, according to founder Rob Ludlow, adds some 100 new members a day.

Many members of these online communities are looking for tips and tactics for persuading local governments to permit chickens because not all neighbors take kindly to a chicken coop pressed up against their already tight urban confines, says Stephen K. Postema, attorney for the city of Ann Arbor, Mich.

Ann Arbor had so much interest in the locavore movement that last year the City Council was forced to re-examine its urban agriculture laws. The result was a permit pro­cess, a limit on the number of hens allowed, and a caveat that neighbors had to agree before the permit was granted. In the end, Postema says, 12 residents applied for permits and only 11 have chickens, as one coop fell victim to a neighbor’s dog.

Other cities that also have recently revisited their livestock laws include Buffalo, N.Y., Cleveland and Madison, Wis.

There appears to be no consistency in the approach to regulations on back­yard chickens. Some cities have gone to the extreme, prohibiting any pet besides cats and dogs. Others allow any animal that isn’t a nuisance, leaving that definition open-ended. Most cities, however, take a middle-ground approach regulating some aspect of the backyard coop, such as a limit on the number of hens—roosters typically are banned—and prohibiting on-site slaughter. Others des­ignate a minimum lot size (typically at least one-half acre), a minimum distance from neighboring property lines or, in some cases, even sign-offs from adjacent neighbors. Some cities require permits and inspections; others only visit a property in the case of a complaint.

Ludlow suspects that some Michiganders prefer to “ask for forgiveness rather than permission” and have started keeping hens without getting the permit. Neighbors are often willing to keep the coop on the QT in exchange for eggs, he says, although he does not endorse this course of action.

Postema also has learned that no matter what a municipality does to try to appease both sides of the backyard debate, someone will be unhappy.

“No matter what num­ber you pick—say you allow four hens—people will be incensed that they can’t have five or six.”

For more information on all things urban chicken, browse these websites:

The City Chicken, summary of many cities’ ordinances regarding chickens.

The Urban Chicken Underground, a blog for those looking to change local laws in favor of permitting backyard chickens.

Urban Chickens, a little bit of everything.

BackYardChickens.com, a clearinghouse for all things urban chicken.