Choir of lawyers is a hit at Magna Carta celebration 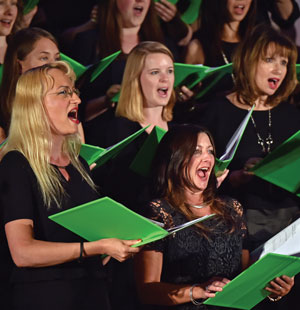 When the ABA was planning the Opening Session for its London Sessions commemorating the 800th anniversary of the Magna Carta this summer, it wanted to strike just the right note for musical interludes. But rather than reach out into the ranks of London's professional ensembles, then-ABA President William C. Hubbard decided to stay within the family, so to speak.

The result was that the music at the Opening Session, held June 11 in London’s Central Hall Westminster, was provided by a special 80-member choir made up of British barristers, solicitors and other members of their firms. The group was conducted by Andrew Sackett, a conductor and keyboardist in London.

The result, by all accounts, was mesmerizing—for the performers as much as the audience of dignitaries.

“When we finished, we were greeted with a unanimous standing ovation for a few minutes, which was rather overwhelming,” says David Smith, the business development director at Outer Temple Chambers, a barristers firm in London. Smith organized the choir and coordinated its preparations to perform at the ABA event. “The feedback, both immediately following and at the drinks reception that I attended in the evening, was exceptionally positive. Many that I spoke to couldn’t believe that we were lawyers or worked in law firms and not a professional choir.”

The experience was just as exciting for the choir members, Smith says. “All those that took part really looked forward to our rehearsals—for some it was the first time that they had been part of such a large choir—and being able to perform before 800-plus people was really thrilling. We all came off stage on a real high, and there was a real buzz backstage. For my part, it was a brilliant experience.”

In addition to inviting Smith to organize the legal choir, Hubbard—a partner at Nelson Mullins Riley & Scarborough in Columbia, South Carolina, whose presidential term ended in early August—selected the works to be sung. They included the national anthems of the United Kingdom and the United States; “The Battle Hymn of the Republic”; “Jerusalem”, which Smith describes as “a very English hymn”; and “I Was Glad,” a tune based on a biblical psalm and put into a version in 1902 by Sir Hubert Parry that was performed in 2011 at the wedding of Prince William and the Duchess of Cambridge (the former Kate Middleton).

It wasn’t just serendipity that brought Hubbard and Smith together. In recent years, Smith—who is not a choir member, although he did sing in his church choir as a child—has been closely involved with Legal Harmony, a nonprofit organization he formed to hold competitions for choirs sponsored by various British law firms. Through its competitions, Legal Harmony raises funds for charities nominated by the firm choirs that participate. Smith says his inspiration for Legal Harmony was Law Rocks, a similar event for bands sponsored by law firms that began in the United Kingdom in 2009 but has since become a global endeavor.

The first Legal Harmony competition in 2014 featured just seven choirs, says Smith, but this year’s event featured 18 from around the U.K. in three rounds of competition at Southwark Cathedral near London Bridge. And they didn’t just stick to the classical repertoire, he says—some groups included songs popularized by performers such as Billy Joel and the Jackson Five. The members of the choir that sang at the ABA’s event were drawn primarily from these groups.

The likelihood of finding choirs at law firms is not that unusual, at least in the United Kingdom, Smith says. After all, choirs have long had a special place in Britain’s musical landscape, and an important part of that tradition is amateur singing. “Choirs seem to be more plentiful here than in other parts of the world,” says Smith, and in the past decade, there has been a growing interest in organizing choirs in workplaces. “I can’t say why we have that interest, but we do.”

Another important factor, he says, is that performing music—and singing does not require the same technical skills as playing an instrument—is a collaborative effort “that gives employees something to bring them together and gives them some other purpose. People want something else, not just working. When you sing or play, you relax, and you’re involved in something different.” Music, Smith says, “is uplifting. It’s almost something visible.”

This article originally appeared in the November 2015 issue of the ABA Journal with this headline: “Legal Singalong: A choir of lawyers is a hit at the ABA’s London Sessions commemorating the Magna Carta’s 800th anniversary.”