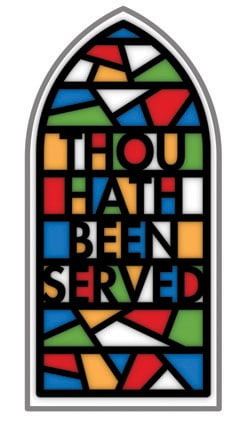 There was a time when bringing a lawsuit against a church was a concept that was incomprehensible to the average person. It was as far from likely as, say, a woman being on the U.S. Supreme Court or a gecko selling insurance.

But we live in an age when the unimaginable often becomes reality. To wit, we’ve had four female Supreme Court justices, some of us buy our insurance based on a sales pitch from a gecko (Geico) or a duck (Aflac), and lawsuits against churches are piling up like dollars on a collection plate.

One notable case involves a reverend and a deacon, who are being sued for their use of crosses. The problem is, those crosses were of the left and right variety, and they landed on the face of a congregant.

According to a lawsuit filed in Sevier County, Tenn., in February, Andrew Byrd of Sevierville was summoned to a meeting at the Pentecostal Family Chapel Church of God in Pigeon Forge. At the meeting were the Rev. Joel Arwood, his wife, Theresa, and deacon Charles Shields.

The lawsuit states that Theresa Arwood told Byrd he had a “demon or spirit that needed to be cast out.” Seeking to exorcise that demon, Joel Arwood and Shields allegedly assaulted Byrd, knocking a crown off one of his teeth, bruising and lacerating his face, and causing injury to his back and leg.

In addition, Byrd alleges that Arwood announced to his congregation that he had “punched the devil and knocked the devil’s tooth out.”

Byrd punched back with the lawsuit, in which he demands $200,000 in compensatory damages and $3.5 million in punitive damages. In March, the Arwoods countersued, claiming that Byrd came to the meeting, assaulted Shields and made threats with a knife. Whose demons actually ran amok is still to be determined.

Meanwhile, in North Vernon, Ind., a Catholic priest dug himself a hole he’s still trying to climb out of.

Shannon Carr lost her husband, Jason, in an August 2009 automobile accident. She wants to honor his memory with a headstone that captures his love of sports and the great outdoors, so she commissioned a $9,600 black granite headstone shaped like a couch and sporting the logos of the Indianapolis Colts and NASCAR. It also features images of a dog and a deer.

“Thou shalt not put that thing in my cemetery” is kind of what the Rev. Jonathan P. Meyer, pastor of St. Joseph Catholic Church, said to her. (The church operates the eponymous cemetery where Carr’s husband is buried.) Officially, the headstone is referred to as too secular.

Carr sued the church and the archdiocese in March, claiming there were no rules disallowing such a headstone when she had it made. Meyer acknowledged in a published interview that the rules currently in place were formalized after the headstone was banned.

Carr remains steadfast in her determination to make sure her late hubby will rest in personalized peace. The church is reportedly bitterly divided over the issue.

So, should either of these plaintiffs have themselves fitted for a lightning rod in anticipation of divine retribution? Probably not. But the reverends might benefit from being reintroduced to a concept known as compassion.