Civil Solution: ABA Says Those Facing Removal from the US Shouldn’t Be Treated Like Criminals 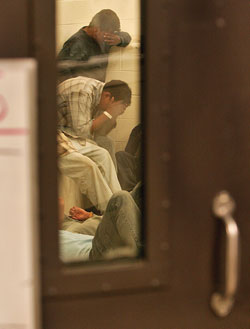 As the federal government detains growing numbers of individuals facing deportation proceedings, the ABA is calling for reforms to ensure that detention facilities provide them with living conditions appropriate to their civil status and access to adequate legal representation.

The most recent action by the association on the issue came in August, when its policymaking House of Delegates adopted the ABA Civil Immigration Detention Standards (PDF). The association’s Commission on Immigration developed the standards as a blueprint for moving away from housing people in jails and jail-like facilities toward a comprehensive civil detention system.

The ABA has conveyed the new standards to the Department of Homeland Security, which carries out its responsibility for pursuing, detaining and removing people in the United States unlawfully through U.S. Immigration and Customs Enforcement. ICE estimates that there are some 10 million people in the country unlawfully at any given time. In federal fiscal year 2011, ICE removed more than 396,000 individuals.

The Immigration Commission estimates that ICE now detains more than 400,000 individuals each year. And although ICE began implementing its own new immigration detention standards this year, holding facilities continue to be administered generally according to American Correctional Association standards that apply to people awaiting criminal trials.

“Immigration detention is not criminal; it is civil. Therefore, detainees should not be held under criminal conditions,” says immediate-past commission chair Karen T. Grisez, whose term ended Aug. 31. The ABA has long opposed detention of noncitizens except in extraordinary circumstances, and it supports housing them in the least restrictive setting possible—separate and apart from criminal inmates in facilities that reflect the civil nature of the immigration detention system, says Grisez, who is public service counsel at Fried, Frank, Harris, Shriver & Jacobson in Washington, D.C.

The ABA worked closely with the federal government to craft the first meaningful set of detention standards, which were issued in the late 1990s. But they never were codified as a statute or regulations, either in their original form or revised versions, including the latest one issued in 2011.

STORIES FROM THE INSIDE

During a hearing held earlier this year by the House Judiciary Committee on the latest version of the standards, ICE officials said improving the detention system is a top priority. Recent changes include creation of an office of detention policy and planning, the launch of an online detainee locator system that can be accessed in multiple languages, and creation of an office of detention oversight to conduct targeted inspections at detention facilities. In addition, ICE is opening new civil detention facilities for the first time.

The ABA emphasizes the need for rigorous oversight to ensure compliance with the standards, and the association is prepared to work with the government to ensure that reforms are implemented.

Meanwhile, the Immigration Commission regularly hears from detainees through its Detention Standards Implementation Initiative; they give accounts of their struggles at facilities with issues such as inadequate medical care, lack of access to legal representation and legal materials, unhealthy and unsanitary conditions, food that doesn’t meet medical or religious dietary needs, and verbal and physical abuse. In addition to these woes, detainees are spread across hundreds of facilities and frequently are transferred away from their families and lawyers.

The new ABA standards reflect the conviction that civil detention facilities and programs should approximate normal living conditions to the extent possible while ensuring that residents appear at court hearings, can be removed from the country if so ordered, and do not present a danger to themselves or to others.

The ABA standards, Grisez says, “further the rule of law by ensuring that the rights of individuals in DHS/ICE custody are preserved and respected,” and by promoting “access to justice, the efficient use of government resources and effective oversight of the immigration detention system.”