Communing with Lawyers: The Benefits of a Firm Without the Bureaucracy 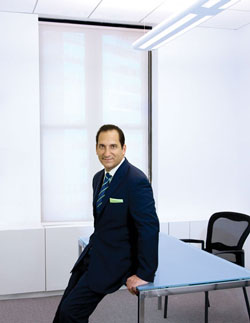 Stephen Furnari never set out to be a property manager.

But a search to find a suitable setting for his expanding solo practice eventually led to oversight of a Manhattan commercial space that has morphed into a collaborative workspace for fellow lawyers.

“The strength of what we do here is all based on our clients participating in and believing in the community,” says Furnari, who splits his time between running his Law Firm Suites business and maintaining a legal practice handling nursing home litigation.

“We really are operating as a team.”

Law Firm Suites is home to about 75 solo and small-firm lawyers from a variety of practice areas occupying 15,000 square feet in the Financial District.

Unlike those in other shared office spaces, Furnari and his co-tenants are committed to sharing business leads whenever possible. He estimates that this commitment has led to $1 million annually in business referrals for him and his co-tenants.

The attorneys spend from roughly $1,000 a month for a small associate’s space to upwards of $2,500 for a partner-style corner office. Their agreements for the space include the services of a shared receptionist and use of conference rooms at no additional fee. They must sign on for at least one year, an obligation Furnari says fosters the reciprocal atmosphere.

“I loved working in a firm environment from a social and practice perspective,” says Furnari, who spent part of his career in a big firm. “But the fighting issue was economics. We removed that from the equation.”

The idea for Law Firm Suites developed after Furnari hung out his own shingle in 2002. He initially rented shared office space alongside a mix of other professionals, but soon needed a larger office due to growth in his practice.

He found larger digs in Lower Manhattan, but the increase in the office space boosted his rent threefold. So Furnari sought ways to economize and began subletting to other lawyers in 2006 to help cover costs. His shared space now boasts a 90 percent occupancy rate.

“I’ve created offices for every kind of budget,” Furnari says.

Peter Aronson, an elder law attorney, has worked in Law Firm Suites for more than two years. He says the collaborative setting makes up for a long commute downtown from his Upper West Side home.

“Even though we all work independently, I feel like there is a great symbiosis,” says Aronson, adding: “Steve is a practicing lawyer; he knows what we need.”

Furnari, who says his office business is profitable but declines to provide specific financials, jokes that the additional role comes with some downsides for his legal practice.

“People look at me as their landlord, so I get the least amount of referrals,” he says.