Connecting With a Cause 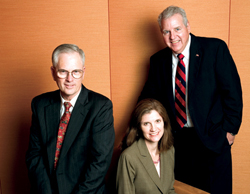 Lawyers from wildly disparate universes cross paths in the U.S. Court of Appeals for the Federal Circuit. The Washington D.C.-based court is the venue for cerebral arguments over in­tellectual property rights, government contracts and such. But this same court hears in­tense, emotional appeals filed by disabled military veterans.

“Ron was such a great guy, so dedicated; some­times he would ask us to read his briefs or help him prepare for court,” says Christine Lehman, a partner at Finnegan in D.C. “It seemed natural to have our lawyers do pro bono work for Disabled American Veterans.”

The firm wants to be able to handle 80 pro bono cases at any given time. Lehman says it sets an annual goal of 2,000 billable hours for each attorney and urges its staff to make 80 of those hours pro bono.

The cases run the gamut from a soldier denied coverage for anesthesia when he had the lobe of a lung cut off—“The Defense Department said anesthesia wasn’t required for that operation,” Lehman marvels—to a World War II veteran who entered a Department of Veterans Affairs hospital for an intestinal disorder and ended up with a leg amputation after a nurse stuck a contaminated IV into his thigh.

Smith and Lehman are sometimes bemused to see the VA, created to champion U.S. soldiers, adopt an adversarial stance so often. But Smith has personal proof the system can work: While he was in Vietnam with the 4th Infantry Division, his daughter was born with hydrocephalus, “a death sentence in those days,” Smith says. “Doctors at Walter Reed Army Medical Center treated her with the then very experimental shunts that drained the excess cerebral fluid. They saved her life. She completed college and today leads an entirely normal existence.”

Are the sometimes dire situations too intense for lawyers who spend most of their time poring over patents?

“It can be, but most of our attorneys seem to thrive on the chance to do something so different and so important,” Lehman says. “And I find working on veterans’ appeals easier emotionally than criminal defense work, which we also do pro bono.”

Lehman is awed by the commitment Gen Y staffers—law students em­ployed by the firm—have shown to the disabled veterans. The young legal eagles work at the firm all day, go to night school and still find time for pro bono.

Finnegan plans to represent Iraq war vets and other soldiers who are challenging the minimal benefits available to veterans with post-traumatic stress disorder.

“Based on the number of cases we are starting to see, we think this has the potential to make a big impact,” Lehman says. “The problems with PTSD, including the VA’s resistance to even give that diagnosis, have been documented.”