Cops can't be everywhere, so citizens fill the void 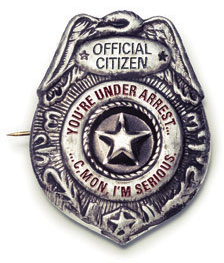 Mention the term citizen’s arrest and the reference point for some people may be a classic episode of The Andy Griffith Show in which Gomer Pyle gives Deputy Fife a taste of his own medicine by citing him for an illegal U-turn. Situation comedy aside, the citizen’s arrest is a legitimate, albeit oft-forgotten, legal tool that can be useful in a wide range of situations.

The concept itself can be traced back at least to medieval England, when sheriffs apparently needed all the help they could get. Most countries to this day permit some form of citizen’s arrest, and there is a veritable patchwork of laws throughout the United States. (For those of you who’d like to try this at home, keep in mind that you’re not a cop, and calling the real ones to finish up is key to performing a successful citizen’s arrest.)

It should be noted that despite one’s best intentions, executing a citizen’s arrest could mean exposing oneself to all manner of liability issues, including excessive use of force, false imprisonment and impersonating a police officer. And with so many concealed carry laws in effect, pretty much anyone could be packing heat these days, not to mention that the reaction from the arrestee could quite possibly be: “You’re kidding.”

All those caveats don’t seem to get in the way, however, when intrepid citizens see a wrong and decide to administer a bit of street justice—not to be confused with vigilantism, where the sentence is handed down and served on the spot. And they persevere even when the intended arrestees are sometimes beyond reach.

On the subject of vigilantism, professor Tyler Cowen was teaching a class on that very topic at George Mason University School of Law in March when Jonathan Pendleton burst in on the class and announced he was placing Cowen under citizen’s arrest. When Cowen resisted, Pendleton pepper-sprayed him. Pendleton didn’t explain his motivation at the time, but a comment on Cowen’s blog with Pendleton’s name on it hinted at a personal vendetta, according to news reports.

The concept can be applied in a group situation as well. In Albuquerque, New Mexico, in May, several protesters interrupted a city council meeting and attempted to place the police chief under citizen’s arrest and charge him with “crimes against humanity” because of an alarming increase in police-involved shootings in recent years. They were careful, however, not to touch the police chief lest they be charged with battery on a police officer (another tip for you amateur crime fighters).

Earlier this year, a bar worker at a trendy London restaurant aimed higher when he attempted to place former British Prime Minister Tony Blair under citizen’s arrest for launching an “unprovoked war against Iraq.” Twiggy Garcia did not actually expect Blair to accompany him to a police station, he later wrote in a piece for the Guardian newspaper. The tactic was an attempt to influence worldwide opinion and collect a sizable bounty from an anti-Blair website, both of which he did.

So, in the vein of what Allen Funt used to tell us on Candid Camera in the ’60s, don’t be surprised if sometime, somehow, somewhere someone steps up to you and says, “You’re under citizen’s arrest.”

This article originally appeared in the August 2014 issue of the ABA Journal with this headline: “Policing by Proxy: Cops can’t be everywhere, so citizens fill the void.”