Could the next person you sue be yourself? 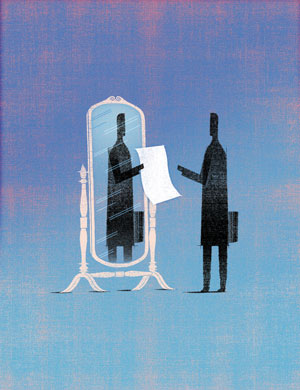 The law allows for a certain level of creativity when it comes to legal theory, rules of procedure and so forth. So when there’s a legal problem to be solved, a little ingenuity can sometimes get you where you need to go.

But in certain situations, a little extra ingenuity is called for. Like when you realize that you are not only the cause of your problem but the solution as well. So what’s the course of action? Walk up to a mirror and go all legal on the first person you see.

In February, the Utah Court of Appeals gave the green light to Barbara Bagley to bring legal proceedings against herself in connection with the 2011 car accident that killed her husband, Bradley Vom Baur. Bagley, who was driving at the time, wants to sue herself for negligence. Why? Well, according to the Salt Lake Tribune, Bagley had herself appointed as the “personal representative” of Vom Baur’s estate, making her responsible for going after whatever monies may be owed. This could include an insurance payment from the policy of the person (Bagley) who negligently caused Vom Baur’s death. And as his heir, that payment would go to her. She could then pay his creditors and keep the rest.

Cunning or diabolical? You decide.

Another situation that was addressed in a rather unorthodox way occurred last October in St. Paul, Minnesota. Parks and recreation employee Megan Campbell was driving a municipal supply van when she damaged the front bumper of a parked SUV that belonged to … Megan Campbell.

Tough luck, right? Maybe not. According to TwinCities.com, Campbell promptly filed a claim against the city, seeking up to $1,900 for the damage to her SUV that was caused by a city employee: herself. The report quotes her claim form: “Because I was working for the city and driving the city vehicle, I feel they are responsible for paying for the damage done to my car.”

Who knows? She may turn out to be right.

Unorthodox is perhaps an understatement in describing the case of Montezuma, Colorado, which held an election on April Fools’ Day 2014, the Summit Daily reports. The town of 65 had 61 registered voters. A new mayor and six trustees were sworn into office.

After the election, however, several residents filed petitions to challenge the residency of 13 voters. Five were found to be ineligible and their votes were stricken, altering the result of one board seat and bringing others into question. Additional allegations included ballot and tallying irregularities.

It was decided that Montezuma would file a lawsuit—essentially against itself—naming all registered voters as respondents. The town’s interim attorney, Kendra Carberry of Denver, says the town petitioned the court to make a decision as to the validity of the election results. Carberry says that citizens op-posing the suit have filed three motions to dismiss, but that a judge has yet to rule.

Who knew that targeting oneself in a legal action could be such a clever strategy? If this catches on, it could become a whole new category of litigation: a selfie.

This article originally appeared in the October 2015 issue of the ABA Journal with this headline: “Note to Self: You’re Gonna Pay: The target of your next legal action could be someone you know very well.”