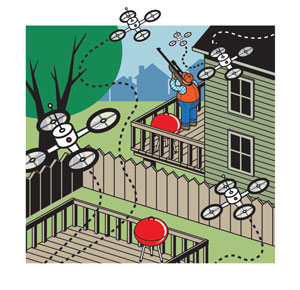 You know how sometimes it feels like you’re being watched while on a bus or in line at the supermarket? You look to your left and right to see whose peepers are peering at you. But these days you might want to shoot a glance upward, as it’s possible that you’re being surveilled by one of the multitudes of drones that are starting to chip away at what is left of our modern-day privacy.

Drones—those flying gizmos with all the propellers—are often equipped with cameras and have been put to various uses by the military, police, firefighters, filmmakers, real estate agents and others. Online retailer Amazon has announced its intention to begin making 30-minute deliveries via drones. But they can be used for nefarious purposes as well. That’s why people tend to have a negative reaction when they see one hovering around their property.

In November 2014 in Modesto, California, Eric Joe was flying his homemade drone on his parents’ property when a shot rang out and the craft fell from the sky, according to a report by Ars Technica. Joe stated that it was shot by neighbor Brett McBay, who suspected it was “a CIA surveillance device.” When the two failed to agree on terms of restitution, Joe brought the matter to Stanislaus County small claims court, which in May ruled in his favor to the tune of $850.

Last July a similar incident occurred in Kentucky when Hillview resident William Merideth’s daughters told him a drone was flying over his and a neighbor’s yards. His neighbor, Kim VanMeter, told WDRB News she has a 16-year-old daughter who likes to lay out by their pool. Merideth reportedly got his shotgun and waited for the camera-equipped drone to hover above his property.

Merideth was arrested and charged with wanton endangerment and criminal mischief. In October, a district judge in aptly named Bullitt County dismissed the charges.

And the anti-drone uprising continued in October when Ascension Parish, Louisiana, resident Derek Vidrine was hunting squirrels and finally decided to shoot down the drone—also equipped with a camera—his wife had been complaining about. Vidrine told the Advocate newspaper that the drone appeared at an outdoor family event and also while Mrs. Vidrine was riding her horse. Drone owner Aaron Hernandez was quoted as saying that he was merely snapping aerial photographs of the areas surrounding his father’s home.

Because drone use is largely unregulated, the Federal Aviation Administration issued a requirement in December that all UAS (unmanned aircraft systems) weighing more than 0.55 pounds and less than 55 pounds at takeoff need to be registered. Those registered after Jan. 21 had to pay a $5 fee. Registered aircraft will be allowed to fly no higher than 400 feet and must avoid airports, open-air stadiums, groups of people and emergency response areas.

Drones have become the subject of multiple legal blogs and will only gain prominence in the law as they further insinuate themselves into our lives. So, drone operators, let’s be careful out there. Your fellow citizens have an aversion to being spied upon—and they’re often armed to the teeth.

This article originally appeared in the March 2016 issue of the ABA Journal with this headline: “Look! Up in the Sky! Courts must decide whether new high-tech toys can also be targets.”