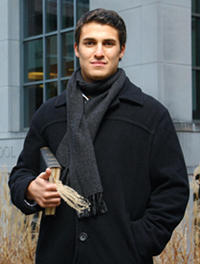 “I blanketed the nation,” says Gould, a third-year student. “I probably sent out 150 applications—an extraordinary amount.” He will, it turns out, clerk for 6th U.S. Circuit Court of Appeals Judge Raymond Kethledge, who is based in Ann Arbor, Mich. “I definitely feel extremely fortunate to have been successful.”

Gould is one of a diminishing number of third-year students to find a clerkship starting in the fall. The difficult economy has forced some states to freeze or reduce the number of clerks hired. And as law firms cut back, many are coaxing clerks from 2009 to stay a second year.

“We have certainly heard about some judges whose clerks have not been able to find jobs in the current economy who have been able to stay on,” says James Leipold, executive director of the National Association for Law Placement. “There has been erosion in the funding across the board at the state level for all sorts of things in the court systems. … It makes sense that there would be less money for clerkships.”

“People are looking wherever they can for jobs,” Leipold says. “Students that might not have looked for clerkships in the past are turning to that as one of several options.”

Michael Bressman, who runs the clerkship program at Vanderbilt, thinks the demand side, rather than job cuts, is driving what he terms “the clerkship crunch.”

“There might be marginally fewer clerkships, but there’s clearly a lot more applying,” he says. “What we are all seeing is more applicants sending out more applications than ever before, or at least in recent memory.”

One reason for the crowded field is alumni, who made up 35 percent of applicants in 2006 and constituted more than half, 53 percent, in 2008, according to OSCAR statistics. That figure held at 52 percent for 2009.

“More and more judges are hiring people who have a year or two of experience,” Bressman says. “The reality is there are going to be fewer spaces for rising 3Ls.”

kirsten Solberg, clerkship adviser at Harvard University, has been encouraging third-years to apply and to consider the array of options beyond the most prestigious federal and appellate positions.

“A lot of people who would not have considered clerkships before have new interest and are checking it out as an option,” she says. “There certainly seems to be an increase among law students concerned about the future of law firms and associates out in practice who are looking for alternatives in light of layoffs.”

A survey of state court systems released last July does not directly address clerkships but suggests the number of positions may be down, while state-by-state figures tally both cuts in positions and a rise in applications.

The survey, conducted by the National Center for State Courts and the Conference of State Court Administrators, found that for the 2010 fiscal year, courts in 27 states face reduced budgets and 12 more anticipate cuts to come.

Ten court systems have seen cuts of at least 5 percent. As a result, 28 state courts have instituted hiring freezes, 13 have frozen salaries, seven have encouraged or imposed salary cuts, six have furloughed court staff, and six have reduced court hours.

Massachusetts did not hire any new clerks for 2009-10 because of a hiring freeze but was able to retain 72 of its 105 clerks who either did not have a position at a law firm or whose hiring date was deferred because of budget cuts, says spokeswoman Joan Kenney. The Boston Globe reported that at least 24 recent graduates who had been offered clerkships for 2009-10 had their offers withdrawn.

The state does not provide an opportunity for a second year of clerkships, unless a New Jersey Superior Court clerk applies for and receives an appellate or supreme court position, says spokeswoman Winnie Comfort. But that doesn’t mean the state’s clerkships will be easy to land, especially for 2010-11.

The “law clerk book” the state sends to judges every August filled with resumés of applicants swelled from 76 for the 2009-10 year to 243 and counting as of late July, with a few more likely to trickle in, for the 2010-11 year, she says. Many applicants apply directly to judges, and Comfort adds that she “wouldn’t have any readily available system for gathering those numbers.”

Florida’s system has laid off nearly 10 percent of its 3,100-member workforce due to a $23 million budget reduction in fiscal year 2009, according to the NCSC.

State courts administrator Lisa Goodner notes that the trial courts have faced a hiring freeze for two years, with clerkships vacated, while the appellate courts are fighting through a “soft freeze” in which positions are held open for one to six months.

She does not know whether more people are applying for those positions, because Florida does not keep a central repository. “Anecdotally, we know there are lots of lawyers looking for jobs,” Goodner says.

In Oregon, the supreme court and court of appeals, which brought in a total of nine clerks last September and 11 starting this year, received 74 applications in 2008 and 123 in 2009, says staff attorney Lisa Norris-Lampe.

She’s aware of rare cases in which judges and clerks extend terms because they simply enjoy working together, but none that have been extended for economic reasons. “It’s not so much ‘I don’t have a job. Can I stay on?’ ” Norris-Lampe says.

But in Nevada, where courts saw a 12 percent budget reduction in fiscal year 2009, requests for a second year have been piling up because of the employment picture, says public information officer Bill Gang.

“It’s just been a down market, and some firms have closed [or] been swallowed up by other firms,” he says. Gang did not have exact numbers, but “the judges and law clerks just say there’s a bunch.”

One state supreme court clerk who graduated in 2008 from the University of Nevada-Las Vegas, the only law school in the state, left for an associate position in late July but did not have it easy, Gang says.

“He started looking in October [2008], knowing that the economy was suffering, and he did not get an interview until May [2009],” Gang says. “He has a stack of rejection letters somewhere north of 4 inches. He applied to virtually everyone around.”

Mindy Baggish, director of career services at the University of California at Davis School of Law, says she’s not aware of clerkship cutbacks in the state but definitely has seen more students and recent alumni applying. “The economy is driving it,” Baggish says, adding that “clerkships are a great opportunity.”

The economy produces ripple effects, says Dan Filler, senior associate dean for academic and faculty affairs at Drexel University. Top students end up in midsize law firms, and those who might have landed federal court clerkships end up in state court, he says.

“They’re pressed at both ends,” Filler says. “Fewer clerkships are available. More people want them. I have anecdotally heard from state court judges that they are seeing applicants from law schools they’re not used to seeing.” One judge told him: “I’m seeing applications from Penn students. I haven’t seen that in years.”