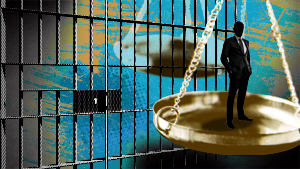 In a series of decisions starting with Brady v. Maryland in 1963, the U.S. Supreme Court carved out a rule stating essentially that prosecutors violate the due process clause of the 14th Amendment if they withhold evidence from the defense in criminal cases that, if disclosed, likely would have been material to the outcome of the case.

But the “material-to-outcome standard” may not be enough to meet the ethics obligations of prosecutors to disclose information that may be favorable to the defense, at least in the District of Columbia.

Ruling on April 9 in In re Andrew J. Kline, a three-judge panel of the District of Columbia Court of Appeals held that the professional conduct rules applying to lawyers who practice in the district require a prosecutor to disclose any evidence or information to the defense that the prosecutor knows or reasonably should know tends to negate the guilt of the accused. In an opinion (PDF) written by Chief Judge Eric T. Washington, the court explained that this decision goes beyond the due process-based requirements set forth in Brady and its progeny.

“In short, although significant overlaps exist in a pretrial versus post-trial ethical analysis, it makes little common sense to premise a violation of an ethical rule on the effect compliance with that rule may have on the outcome of the underlying trial, because there can be ‘no objective, ad hoc way’ for a prosecutor ‘to evaluate before trial whether [evidence or information] will be material to the outcome,’ ” states the opinion, citing its 1979 ruling in Lewis v. United States.

As the equivalent of a state supreme court for the District of Columbia, the court’s authority includes promulgation of lawyer conduct rules and hearing cases brought by the Board on Professional Responsibility.

In Kline, the court interpreted Rule 3.8(e) of the District of Columbia Rules of Professional Conduct in considering whether a former federal prosecutor should be disciplined for not turning over his notes from a conversation with a police officer who was the first responder at a drive-by shooting. The officer had spoken to the victim as he was recovering from his wounds in a hospital. Kline’s notes indicated that the officer said the victim did not know who shot him.

The first trial of the shooter ended in a mistrial in March 2002, when the jury could not reach a verdict. Kline left the U.S. attorney’s office before the second trial started. At the second trial, the victim’s statement at the hospital was provided to the defense, but the defendant was convicted and the conviction was affirmed on appeal.

Meanwhile, the Board on Professional Responsibility concluded that Kline violated Rule 3.8(e) by failing to disclose the hospital statement and recommended that the Court of Appeals suspend him for 30 days.

Rule 3.8(e) states that a prosecutor in a criminal case shall not “intentionally fail to disclose to the defense, upon request and at a time when use by the defense is reasonably feasible, any evidence or information that the prosecutor knows or reasonably should know tends to negate the guilt of the accused or to mitigate the offense.” The rule also requires prosecutors to make appropriate disclosures in connection with sentencing. There are similar provisions in Rule 3.8 of the ABA Model Rules of Professional Conduct, which are the basis for binding ethics rules in every state, although California follows a different format.

In response, Kline stated he did not believe the rule required him to turn over his notes from the hospital interview because they were not material to the outcome of the trial. He argued that the District of Columbia rule should be interpreted in light of the Supreme Court’s line of Brady cases, and he cited a comment to the D.C. rule that states: “The rule, however, is not intended either to restrict or to expand the obligations of prosecutors derived from the United States Constitution, federal or District of Columbia statutes, and court rules of procedure.”

The court rejected that argument, stating: “Kline’s reliance on the comment to support his interpretation of the rule is unavailing because the text of the rule is always controlling when it comes to interpreting a rule.” Furthermore, the court stated, “adopting an ethical rule that errs in favor of disclosure will better ensure that criminal defendants in the District of Columbia receive a fair trial.”

Accordingly, the court concluded, “we hold that Rule 3.8(e) requires a prosecutor to disclose all potentially exculpatory information in his or her possession regardless of whether that information would meet the materiality requirements” of the Supreme Court’s standard.

But the court determined that no sanction should be imposed against Kline given the uncertainty as to the proper scope of a prosecutor’s obligation under Rule 3.8(e). “We must conclude that his interpretation was wrong, but it was not unreasonable,” stated the court. Several other jurisdictions that have addressed this issue are split, the court noted.

“I agree with the court’s decision for the reasons reflected in the ABA’s [2009] opinion on the ethical duties of prosecutors, including that the language of the rule on its face doesn’t have a materiality requirement,” says Bruce A. Green, who directs the Louis Stein Center for Law and Ethics at Fordham University School of Law in New York City. “Also, the rule is not meant to codify the constitutional discovery rule; otherwise there would be no need for the rule.”

“There is a serious need to have a rule requiring prosecutors to disclose exculpatory evidence,” Green says. “Furthermore, Brady has a harmless error analysis, which means it is a retrospective rule. The legal system and prosecutors need an ethics rule that provides guidance prospectively for prosecutors.” Peter Joy, who teaches legal ethics at Washington University School of Law in St. Louis, offers a similar conclusion. “The D.C. Court of Appeals reached the correct result in finding that the prosecutor breached his ethical duty under the D.C. ethics rules,” he says.

“The D.C. ethics rule, 3.8, is based largely on ABA Model Rule 3.8,” Joy explains. “The ABA Standing Committee on Ethics and Professional Responsibility explained in an ethics opinion several years ago that the prosecutor’s ethical duty under Model Rule 3.8 to disclose exculpatory evidence and information is separate from and more expansive than Brady and the Brady line of cases. Most state high courts that have grappled with this issue have reached the same conclusion as the D.C. Court of Appeals and the ABA.”

But Green and Joy also agree that the court was correct in deciding not to sanction Kline. “I think the finding of no sanction was justified in this case,” Green says. “It is not fair to punish a person when the rule is vague or ambiguous and the court is interpreting the rule for the first time.”

An interesting question now is whether other jurisdictions will address this question. “I think other state courts are likely to address this since there is now a division of opinion,” says Kevin C. McMunigal, who teaches professional responsibility at Case Western Reserve University School of Law in Cleveland.

This article originally appeared in the July 2015 issue of the ABA Journal with this headline: “A Tougher Test: D.C. prosecutors to follow a broader standard for disclosing information to the defense in criminal cases.”

This article initially ran online with the wrong reporter credited. David L. Hudson Jr. is the author of this piece. We regret the error.