Daughter pushes back against pushy parents 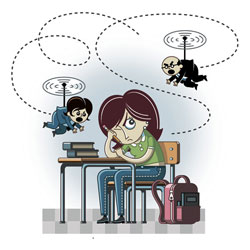 Any parent of a Cub Scout has attended a Pinewood Derby, at which the lads race their handmade cars on a downhill track. The cars usually look as though they were carved by 10-year-olds, but you’ll always see some that appear to have been crafted by Black Forest artisans. Hmmmm, it looks like a few dads want to win even more than their sons do.

There’s nothing wrong with hands-on parenting; you just need to know when to keep your hands to yourself. There’s a term for those who hover over their children and try to influence everything they do—they’re called helicopter parents, and though they try to be their child’s best friend, they can end up being his or her worst nightmare.

A Leawood, Kan., couple raised a daughter—their only child—who was offered several full college scholarships. But Aubrey Ireland turned them down because she wanted to pursue music and acting at the University of Cincinnati. Julie and David Ireland generously agreed to pay the full freight at UC, and Aubrey flourished there, making the dean’s list and taking part in several stage shows.

But the largesse came with some strings attached—Mom and Dad apparently felt entitled to oversee every aspect of their daughter’s life.

Here’s a short dramatization of how life was for Aubrey during her first three years at college:

Aubrey: Who is it?

Julie & David: It’s your parents, dear. We decided to drop in on you.

On top of unannounced visits, Julie and David reportedly tracked Aubrey’s Internet activity and phone calls. But after they told the head of the musical theater department that their daughter needed treatment for mental illness—and then accused her of being promiscuous and taking illegal drugs—Aubrey had had enough.

She filed a civil stalking order against her parents and reportedly said at an October hearing, “It’s just been really embarrassing and upsetting to have my parents come to my university when I’m a grown adult and … basically slander my name and follow me around.”

At a December hearing her mother demanded that Aubrey pay back the $66,000 spent for her three years at the school. Julie was quoted as saying that Aubrey “was catered to all her life by loving parents. … We’re not bothering her. We’re not a problem.”

A Cincinnati judge disagreed and ordered the Irelands to stay at least 500 feet away from Aubrey and have no contact with her until Sept. 23 of this year.