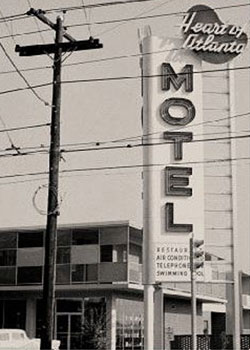 Photo by Harris and Ewing

Two hours after the 1964 Civil Rights Act was signed into law, on July 2, attorney Moreton Rolleston filed a suit challenging its constitutionality. He was part-owner of a large motel, the Heart of Atlanta, which advertised nationally and was popular with interstate travelers. It had refused to take in black guests, and vowed to maintain that policy—putting it squarely at odds with Title II of the new legislation, which banned discrimination in all places of public accommodation.

Rolleston argued that by interfering with his right to operate his business “as he sees fit,” Congress had exceeded its regulatory authority, placing him in a position of “involuntary servitude.”

Though the Supreme Court upheld the new law unanimously, two justices expressed concern about the court’s reliance on the commerce clause. The approach, one confided, might imply to some that “hamburgers are more important than human rights.”

Rolleston decried the ruling as a step toward a “socialistic state,” but he also offered a more optimistic view of future race relations in the U.S.: “With my grandchildren, there won’t be any problems at all. They won’t even know there were any.”

Due to a production error, an early, unedited draft of this article was inadvertently published in the December magazine and the initial online article. This updated version was posted Jan. 5, 2011.