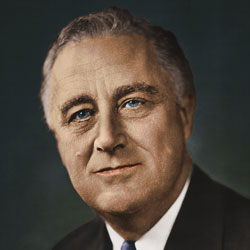 In June 1799, two years after he said farewell to the nation’s first presidential administration, George Washington was approached by Jonathan Trumbull Jr., a close friend and a former speaker of the House of Representatives, about running for a third term as president. A year earlier, Washington’s successor, John Adams, had prevailed upon him to once again lead the nation’s army. The French Revolution was in a death spiral, and some, including Washington, feared the outbreak of a war with France. Because of that, Trumbull believed Washington would be receptive.

But Washington, having retired after two terms in office, remained faithful to the precedent he himself had set: that serving beyond two terms might suggest the office was intended for a ruler, not a democratically elected leader. Moreover, he didn’t care for the emerging political climate. Politicians of the day, he wrote Trumbull, “regard neither truth nor decency; attacking every character without respect to persons—public or private—who happen to differ from themselves in politics.”

Washington’s disinclination was reinforced when Thomas Jefferson refused to offer himself for a third term. Although no constitutional prohibition existed against it, the two-term limitation remained unchallenged until the Republican National Convention of 1880, when a cadre of Republicans known as the Stalwarts tried to nominate Ulysses S. Grant for an unprecedented third term as president.

Though Grant’s two-term tenure ending in 1877 had been plagued by scandal, Grant retained a personal popularity undiminished after he left office. By nominating him anew, the Stalwarts hoped to stave off federal civil service reforms that threatened traditional political patronage. Grant never publicly acknowledged the campaign, but he entered the Republican convention in Chicago as the front-runner. But after 36 ballots, the nomination ultimately went to James Garfield.

The two-term limitation was once again tested in 1912 by Theodore Roosevelt. Angered by the reversal of some of his progressive policies, Roosevelt reneged on an earlier promise not to seek a third presidential term to challenge his Republican successor, William Taft. But Roosevelt’s “inordinate ambition” became an important issue. Rejected by the Republicans, he ran an unsuccessful campaign as a candidate for the Progressive Party.

Roosevelt’s first term resulted from the assassination of William McKinley. Because he had already served more than three years, Roosevelt at first considered his election to a full term of office a second term. Though he later abandoned that view, his defeat mooted the third-term issue until Calvin Coolidge took office after the death of Warren Harding. Coolidge was elected in 1924 but famously refused to run four years later, and the “third-term issue” was once again moot.

But by 1940, after more than a decade of global economic depression, dramatic government reform and war metastasizing across Europe, the likely reelection of Democrat Franklin Delano Roosevelt to a once-unimaginable third elected term brought renewed vigor to the two-term issue. In deference to those concerns, Roosevelt declared his delegates free to vote their conscience at the nominating convention. But on July 18, he was nominated on the first ballot, the first president ever nominated by his party for a third term.

That violation of convention became a rallying point for his Republican opponent, Wendell Willkie. And even the Democrat-controlled Senate held 16 days of hearings on the third-term issue prior to the November election. Still, Willkie lost handily, no congressional action was taken, and U.S. entry into World War II in 1941 obviated any political concerns about Roosevelt’s election to a fourth term in 1944.

By the time of Roosevelt’s death in April 1945, the issue had moved to the forefront of American politics. It became a regular question in Gallup polls, which showed considerable support for a constitutional amendment to codify a two-term precedent.

In 1947, Congress approved the 22nd Amendment. It was ratified by three-fourths of the 48 states in February 1951 after Minnesota became the 36th state to do so.