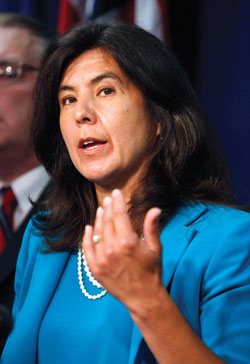 Anita Alvarez: “I took an oath… to defend the constitution of the state of Illinois and I believe that’s what I’m doing.” AP Photo/Charles Rex Arbogast, File.

In Illinois, Cook County State’s Attorney Anita Alvarez declined last year to do one key aspect of her job: Defend the laws within her jurisdiction.

In court filings, Alvarez declined to defend the Illinois Marriage and Dissolution of Marriage Act, which defines marriage as between a man and a woman. New York City-based Lambda Legal and the American Civil Liberties Union of Illinois have opposed the marriage law. In their combined case, 25 Illinois couples filed suit against Cook County Clerk David Orr after being denied marriage licenses by his office, which is responsible for issuing marriage licenses in Chicago and its surrounding suburbs. The lawsuit asks a judge to overturn the marriage law. Illinois does allow same-sex civil unions. But the plaintiffs say they are challenging their exclusion from marriage and being relegated to the “inferior status” of civil unions.

Alvarez agreed with the plaintiffs that the gay marriage ban violates the Illinois Constitution’s equal protection clause. “I took an oath when I was sworn in to defend the constitution of the state of Illinois and I believe that’s what I’m doing,” Alvarez told the Associated Press. “I’m not going to defend something I believe is in violation of the constitution.”

Nor is Alvarez alone in choosing to abstain from pursuing or defending particular laws of one’s jurisdiction. In other parts of Illinois—as well as other states, and even in the federal government—prosecutors are making similar decisions and standing by them. For example, President Barack Obama told the Justice Department in 2011 to stop defending the constitutionality of the Defense of Marriage Act.

In response to the administration’s stance, the U.S. House of Representatives’ Bipartisan Legal Advisory Group agreed to defend DOMA. In United States v. Windsor, the U.S. Supreme Court will hear arguments this term about the group’s standing as well as other issues tied to DOMA.

Some legal ethics experts say that prosecutors are obligated to defend the laws of their jurisdiction. “A state’s attorney doesn’t get to pick and choose what laws she wants to prosecute,” says David A. Erickson, a retired justice of the Illinois Appellate Court and the director of the criminal litigation program at the Illinois Institute of Technology’s Chicago-Kent College of Law. “What if the state’s attorney was a person who doesn’t believe in hate crimes? You can’t just say I’m not going to enforce this law or defend it because I don’t believe in it or I don’t think so. That’s flat-out wrong.”

But R. Michael Cassidy, who teaches prosecutorial ethics at Boston College Law School, counters that a prosecutor facing the enforcement of a controversial law may actually have a duty to refuse the case. First off, Cassidy says, states generally have a definition of a prosecutor’s role and responsibilities. In Illinois, for example, the state’s attorney has a duty to defend the state constitution.

In addition, Rule 3.1 of the American Bar Association’s Model Rules of Professional Conduct, which Illinois has adopted, says that a lawyer shall not bring or defend a proceeding or assert or controvert an issue unless there’s a basis in law and fact.

“Essentially we don’t want lawyers asserting frivolous claims. It’s be-neath the dignity of the profession and wastes resources,” Cassidy says. “If a state’s attorney decides there is no reasonable likelihood of success, then they have an ethical responsibility not to defend the statute because such a defense would be frivolous.”

In the Illinois case, Attorney General Lisa Madigan has filed notices asking to be heard on the question of the law’s constitution-ality, indicating that her office will not take over the law’s defense. Even Orr says the ban discriminates against same-sex couples.

“As everyone who has followed this issue knows, I fully support the right of people to marry, regardless of their gender or sexual orientation,” Orr said in a statement. “Nobody should have to pass a gender test to get a marriage license.”

Since then, two county clerks have intervened in the case to defend the law.

“These county clerks were forced to intervene in order to ensure that the law receives a proper defense,” says Peter Breen, executive director and legal counsel for the Chicago-based Thomas More Society, a nonprofit law firm representing the clerks. “This law has been in effect for over 16 years and similar laws have been upheld by almost every state and federal court that has looked at them. Under a rational basis review, these laws hold up. It’s so clear that this is constitutional and valid that there is no excuse for a government prosecutor to abandon the defense of this law.”

Adds Breen: “There is a disturbing trend of public officials not defending laws that they have sworn to uphold and defend.” Also, “their role is not to rewrite the law to read as they would like, but instead to faithfully execute the laws as written.”

Same-sex marriage isn’t the only issue perplexing Illinois prosecutors. The state was the only one in the country that banned residents from carrying concealed guns. Last August, McLean County State’s Attorney Ronald Dozier announced that he believed the state’s ban to be unconstitutional.

“We will no longer use the power and authority of our office to criminalize and punish decent, otherwise law-abiding citizens who choose to exercise the rights granted to them by the Second Amendment,” Dozier said in a press release. Dozier stated that Illinois law criminalizes people for “merely possessing (not using or threatening to use) a firearm in the wrong place or wrong kind of container.”

In December, the 7th U.S. Circuit Court of Appeals at Chicago struck down the law. “The Supreme Court has decided that the amendment confers a right to bear arms for self-defense, which is as important outside the home as inside,” wrote Judge Richard Posner in Moore v. Madigan.

A QUESTION OF RESOURCES

A few years ago, Nebraska’s attorney general threw himself into the center of a controversy by refusing to defend the state’s abortion law. In April 2010, the Nebraska governor signed a law requiring health screenings for women seeking abortions. Planned Parenthood of the Heartland filed a lawsuit in federal court in Nebraska challenging the law. U.S. District Judge Laurie Smith Camp temporarily blocked the law.

But then Nebraska Attorney General Jon Bruning said he would not file an appeal to defend the abortion law. Bruning’s spokeswoman explained that it was evident from the judge’s ruling that the law would ultimately be found unconstitutional.

“We will not squander the state’s resources on a case that has very little probability of winning,” said spokeswoman Shannon Kingery at the time. In the end, Bruning agreed to a permanent injunction against enforcement of the law. The Supreme Court opened its fall term last year by refusing to hear an appeal in the case.

While some advocates applaud prosecutorial discretion in the enforcement of particularly political laws, Erickson says that prosecutors, whether state or federal, simply must abide by their duty to enforce and protect laws as written.

“As a prosecutor, you should not take a political position that somehow stands in the way of enforcement of the laws as they are written,” Erickson says. “If you don’t like a law, as an elected prosecutor, you can make your voice heard in the legislature.”