California judge empowers others to become fit and healthy 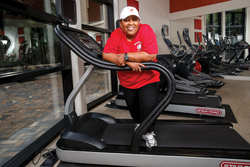 Eight years ago, San Jose, California, Judge Sharon Chatman weighed 255 pounds and had high blood pressure. During a medical exam, her doctor explained that if she didn't do something, she had "a good chance of dying," Chatman recalls.

Immediately, she embarked on a weight loss quest that included limiting her food intake and starting an exercise program. "My first goal was to walk to the corner and back. I did that for one week. The next week, I walked two blocks and back." Soon, the blocks turned into miles, and eventually Chatman was walking 10 miles a day.

The onetime basketball coach was so thrilled after completing her first 10K, she wore her medal on a date that night. (It now has pride of place in her chambers.) She has since shed more than 100 pounds and completed several marathons.

"I wanted other women to have that same elated feeling," Chatman explains about her motivation for forming the Red Power Divas fitness group. To eliminate as many barriers to fitness as possible, the group requires no fees, no fundraising and no pressure to run fast or to show up every day.

A 14-year court veteran who handles felony trials in the criminal division, Chatman says her work with the Red Power Divas has made her a better judge. "Most of what we do at the court is highly stressful. For me, this is the best stress relief."

This article originally appeared in the January 2015 issue of the ABA Journal with this headline: “Diva power! California judge empowers others to become fit and healthy”