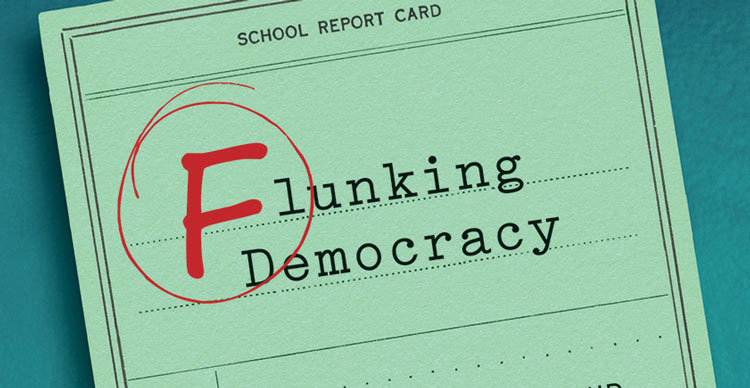 Are civics classes a constitutional right for high school and elementary school students?

That novel question is the basis of a lawsuit against Rhode Island, alleging the state has failed to prepare young people for the rigors of citizenship. The plaintiffs, made up of students and their parents, contend that the U.S. Constitution requires Rhode Island to educate students to “function properly as civic participants.”

“Students are not adequately educated in civics and how our government functions,” says Michael A. Rebell, lead lawyer for the plaintiffs.

Rebell, a veteran litigator, is executive director of the Campaign for Educational Equity at Teachers College, Columbia University, and an adjunct professor at Columbia Law School. He brought the case on behalf of the plaintiffs based on his seminar for Columbia law students called Schools, Courts and Civic Participation.

“During the course of the seminar, we identified a half-dozen states with the most potential to sue [for not providing a basic education in civics],” Rebell says.

“We went to each of these states, talked to lots of people and determined that Rhode Island was the best place to bring suit,” he says. Many of those people became parties to the lawsuit.

Rebell conveys a sense of urgency when discussing what he hopes will be a test case for civic education in schools. “If the next generation of young people is not properly educated [in civics], our form of government will be imperiled,” he says.

Rebell, author of Flunking Democracy: Schools, Courts, and Civic Participation, says this includes education on voting, serving on juries, freedom of speech, peaceable assembly and the functions of the three branches of U.S. government. A new ABA Survey of Civic Literacy exposed confusion and gaps in the public’s knowledge of U.S. government, basic rights and constitutional protections.

Constitutional law expert Steven D. Schwinn, professor of law at the John Marshall Law School in Chicago, says he believes that Rebell has a persuasive argument. “The case for civics education is one of the easiest cases to make in a democracy—right alongside the cases for the right to vote, the right to free speech and the right to access the judiciary,” Schwinn says.

Although Rebell’s argument may be effective, Schwinn notes there are problems with the case.

“According to the Supreme Court, the rights in our Constitution are generally negative rights, meaning that they restrain the government and say what the government cannot do,” he says. “But a right to education is a positive claim on government, requiring government to do something. As a general matter, that kind of positive-rights claim cuts against the negative-rights tradition that the court has read into our Constitution.”

And there’s another challenge.

“The court recognizes that education is primarily a function for the states, not the federal government,” Schwinn explains. “So the court will likely defer to the states in making judgments about how best to provide civics education.”

Undeterred, Rebell is relying on the 1973 San Antonio Independent School District v. Rodriguez case, in which the right to educational equality was at issue. The U.S. Supreme Court’s ruling noted that citizens need some “quantum of education” to knowledgably exercise their right to vote, but the court did not act on that matter. Rebell says he believes that “quantum” has not been achieved. “This is the door left open in the Rodriguez case that we hope to enter,” he says.

Rhode Island has filed a motion to dismiss the complaint, but if plaintiffs don’t prevail, Rebell plans to appeal all the way to the Supreme Court, if necessary.

This article appeared in the June 2019 issue of the ABA Journal under the headline: "Reading, Writing and Democracy: Advocates sue Rhode Island to require civics ed for students."