Entrepreneurs educate by gamifying the law 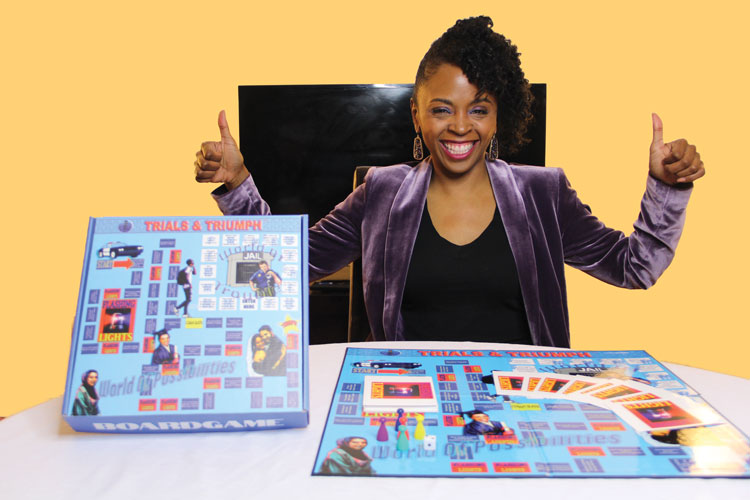 April Preyar: "Instead of preaching at them from in front of the room and saying this is what an armed robbery is and this is what happens if you and your friends commit this crime or that crime, they can actually see it." Photo by Christian Demar Photography.

Chicago criminal defense attorney April Preyar is making sure youth are game to learn about the law.

Preyar has been on a mission to educate teens about what to do—and what not to do—during encounters with police. And she hopes the board game she developed, Trials & Triumph, will help keep kids out of jail. The idea for the game evolved after videos of Preyar giving tips on how to interact with law enforcement went viral on Facebook.

“Once I saw the response to that, I realized I had an obligation because this wasn’t something that people were taught in school,” says Preyar, co-owner and partner at Shiller Preyar Law Offices.

Trials & Triumph features 54 real-life scenarios to which players respond as they navigate the board, guided by a set of rules applied to police encounters: Don’t run, reach, resist or “run your mouth.” Do request a lawyer, refuse all DUI tests and refuse consent to search. Preyar believes an interactive approach to learning about criminal justice is more effective than a lecture.

“Instead of preaching at them from in front of the room and saying this is what an armed robbery is and this is what happens if you and your friends commit this crime or that crime, they can actually see it,” Preyar says.

Preyar launched an Indiegogo campaign to help finance the venture and has sold hundreds of games so far.

But Trials & Triumph isn’t the only law game in town. In April, Japan-based Capcom Co. re-released its classic Phoenix Wright: Ace Attorney Trilogy for for PlayStation 4, Xbox One and other gaming consoles. Users play a newbie lawyer investigating crimes by surveying scenes, interviewing witnesses and gathering evidence. They get into courtroom action, using case files to examine witnesses, call out contradictions in statements and advise clients on the stand. The $29.99 game is rated T for Teen by the Entertainment Software Ratings Board.

Preyar’s teen-targeted board game and Phoenix Wrightare among the latest offerings that gamify law for a new generation, but there are others on the market hoping to educate and captivate.

The State Bar of Texas’ Law-Related Education department has a suite of online games, including the evidence law game Objection! Your Honor. And retired U.S. Supreme Court Justice Sandra Day O’Connor founded iCivics in 2009 to boost civic education via online games at no cost to schools. More than 6 million elementary to high school students have used the game, says Louise Dubé, executive director of the Cambridge, Massachusetts-based nonprofit. Titles include Do I Have a Right? in which students play at running their own law firm.

“[O’Connor’s] vision was to go in when they’re younger,” Dubé says. “It’s really to build a sense that you belong to a country and that it’s very important to know how it works. What the rules are. What is the rule of law? What does it mean?”

Tina Nelson’s Lawsuit! board game has a younger generational target. She created the game as a Father’s Day gift to teach her children about what she and her husband—they are both in private practice in New York City—do at work. Players collect money when they win lawsuits and reach settlements, lose turns when parties fail to come to terms, and pay money when they fail to file appeals on time. Friends encouraged Nelson to mass-produce the game. It’s sold for about $35 at the Supreme Court Historical Society Gift Shop, the National Constitution Center and the Madison Museum of Contemporary Art, as well as online.

“Basically, I tried to make it fun and mimic what it’s like to be a lawyer as much as I could without losing the fun aspect of the game,” Nelson says. “Young kids don’t care necessarily that they’re learning. They just want to have fun.”

This article was published in the July-August 2019 ABA Journal magazine with the title "Game Time."